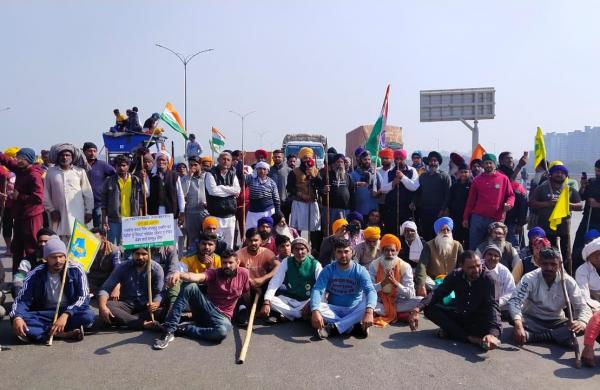 By PTI
NEW DELHI: Loud rustic protest songs blared from speakers, the Tricolour fluttered atop trucks and tractors, and commuters mostly waited patiently as farmers blocked the KMP Expressway Saturday as part of their three-hour ‘chakka jam’ to press their demand of repealing the three new agricultural laws.

The call for the nationwide ‘chakka jam’ between 12-3 pm was given by the farmer unions protesting at the Delhi borders the Centre’s agricultural laws.

“I came to the stretch at 11 am. There were very few people then, but the number swelled in no time.

The purpose is to peacefully do just what is instructed to us by our leaders — block the road till 3 pm,” said Mukesh Sharma, a local farmer supporting the movement.

Biscuits and fruits were distributed among the protesting farmers sitting on the road.

Those coming to the stretch with their vehicles were politely informed about the protest and requested to turn back.

“We don’t want to cause any inconvenience to the people,” said Ajit Ahluwalia (29), from Haryana’s Hisar.

“That’s precisely the reason why the call given was for three hours only. Security forces have been blocking ours and theirs passage for so many days. We expect the ‘aam aadmi’ to cooperate with us for some hours at least.

And the truth is they are,” he said.

Some vehicles, carrying people with emergency health conditions, were allowed to pass without any delay.

The 136-km Kundli-Manesar-Palwal (KMP) Expressway or the western peripheral expressway was inaugurated by Prime Minister Narendra Modi in 2018.

It was built to decongest the ever-busy roads of Delhi, especially by reducing the number of trucks entering the national capital, thus helping to curb pollution.

The commuters, mostly waiting patiently, said they knew about the ‘chakka-jam’ but had to be out due to social and professional engagements.

While Satnam Sandhu (42), a private contractor, had to attend a business meeting; Sonu Ahuja and his family were going for his cousin’s weeding.

“We are farmers ourselves, and support the farmers’ movement completely. I have gone to the Singhu border many a times for the protest.

And even today, had it not been my cousin’s wedding, you would have seen me here standing and protesting with my farmer brothers,” said 36-year-old Ahuja.

Thousands of farmers have been protesting since late November at the Delhi borders with Haryana and Uttar Pradesh, demanding a rollback of the Farmers’ Produce Trade and Commerce (Promotion and Facilitation) Act, 2020; Farmers’ (Empowerment and Protection) Agreement on Price Assurance and Farm Services Act, 2020; and Essential Commodities (Amendment) Act, 2020.

The three-hour-long agitation was announced to register protest against the internet ban in areas near their agitation sites, alleged harassment meted out to farmers by the authorities and other issues.