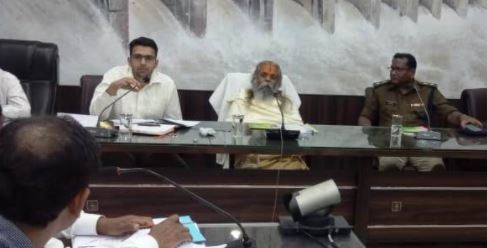 Chhattisgarh Gausseva Commission Chairman Rajeshree Dr. Ramsunder Das Mahant reviewed the works by taking a meeting of the Animal Cruelty Prevention Committee set up at the district level this afternoon. During this, he also spoke positively about the Gaushala and Gowthans and spoke to the members of the Commission to cooperate as much as possible in coordination with the Commission.
In the meeting held in the collectorate meeting room, the chairman of the commission, Dr. Mahant said that the Gauthan scheme is the most important scheme of the Chief Minister Mr. Bhupesh Baghel under which the state government is working with a resolve to develop the cow and cow. The government is striving for cow protection and cow breeding through the said scheme. He further said that permission has been given by the government to set up additional sheds in registered cowsheds, which will make it easier for cow owners to protect and protect livestock. Dr. Mahant also informed that in every district of the state as per the wish of the government, an animal hospital will be established, where basic facilities will be available. He directed the Deputy Director Livestock Development to quickly identify the plot for its establishment in the district. In the meeting, the committee members demanded strict action against the incidents of cow-smuggling in the district, on which the chairman of the commission directed the Superintendent of Police to take strict action against vehicles involved in cow-smuggling. The CEO of Zila Panchayat present at the meeting. Mr. Mayank Chaturvedi spoke on behalf of the district administration to cooperate as much as possible.
Prior to this, Deputy Director Veterinary Services Dr. M.S. Baghel gave information about various sections and provisions under the Prevention of Cruelty to Animals Act, 1960, constituted at the district level, under sections 428, 429, 430, section 11, 12, 21, 415, 417, 420 and section 377 of the Indian Penal Code. Explained the provisions of punishment. The committee members discussed problems related to cowshed and cow breeding, assured by the Chairman of the commission, Dr. Mahanta, for proper disposal. SP Mr. B.P. Rajbhanu, Additional Collector Mr. Dilip Agarwal, Municipal Corporation Commissioner Mr. Ashish Tikriha and members of the committee were present.