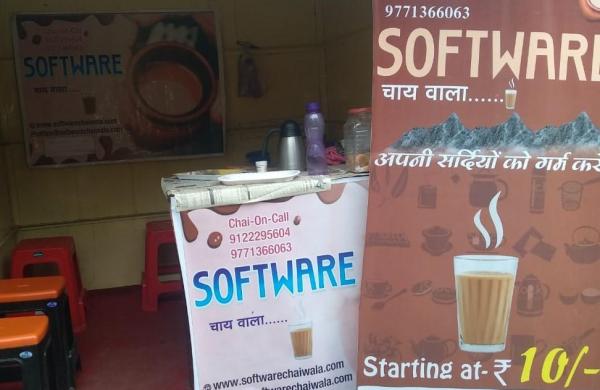 Express News Service
PATNA: For the residents of Bihar’s Siwan city, this chai seller’s business has come as surprise and comfort during winter. The idea that hot tea is only one phone call away and costing only Rs 10 per cup within few minutes.

‘Software-Chai wala’ was started in Siwan city by Aftam Alam about 120 km from the state capital.

The 28-year-old youth, who is a graduate in computer application, was working in a five-star hotel in Saudi Arabia prior to the lockdown and later returned to India.

Aftab Alam, son of a farmer of neighbouring Gopalganj district, has started this tea outlet in Siwan city on December 2 in 2020.

“When I returned from Saudi Arabia and could not return after lockdown, I decided along with my friend Fakarruddin to started this tea outlet with home delivery service by receiving order via phone and websites,” he told this newspaper.

The demand for hot delicious tea has increased many folds due to the prevailing chilly weather when the people don’t want to venture out from their homes.

On the first day of service called ‘Chai on call’, Aftab Alam got order for only 20 cups and he ensured the home delivery in thermo-jar within 5 minutes of the order.

“Since I graduated in computer application and had worked on a Saudi based 5-star hotel, I know how to run this kind of service following proper hospitality etiquette. That’s why I have named this ‘Software Chai-wala’ for home and the spot delivery of tea just on calls or order placed through digital platforms,” he added.

Aftab has employed three others youths for making delivery of booked tea by bicycles. “The maximum numbers of order for hot tea are received from medical establishments like hospitals, clinics and government offices. The old age people who prefer not to venture out due to chilly weather prefer to make calls for tea their homes also,” he added.

On delivery at home, Rs 10 is charged for one cup of tea while Rs 7 is charged at the stall.

Aftab Alam, buoyed over the response of such service, has now decided to set up restaurant under the same brand name of “software Restaurant” with the same kind of service.

The orders are taken to serve at weddings, birthdays and other events as well.

Alam rued that due to paucity of fund, the service is not being taken across the district of Siwan and Gopalganj. “If this kind of service is taken up as small scale industry and supported financially, it will generate employment,” he said.