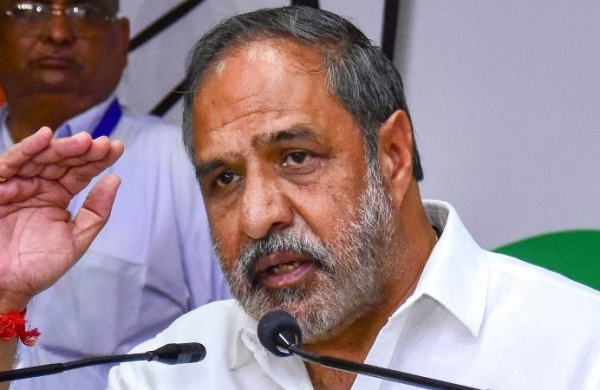 By PTI
NEW DELHI: Senior Congress leader Anand Sharma on Tuesday called for unity between the Centre and states in fighting the Covid pandemic, saying it is time Prime Minister Narendra Modi walk the talk on cooperative federalism.

His statements came in the backdrop of some opposition-ruled states accusing the Centre of not lending a helping hand in procuring vaccines from abroad, and in the larger fight against the pandemic.

Sharma said the coronavirus has hit villages in a big way in the second wave and the people of country are suffering and “feeling let down”.

It is not only a legal and political duty, but also the moral responsibility of the government to protect the lives of all Indians, he said.

“The path of confrontation between center and states hurts India’s national interest. PM Modi has spoken of Cooperative Federalism. It is time to walk the talk.”

“I urge the PM to take the initiative for a dialogue with the Chief Ministers to confront this challenge. In a democracy differences in ideology will remain but these should not become personal. We must all stand united in this time of crisis,” he said in a series of tweets.

Sharma said democracy is about cooperation and dialogue and just as the prime minister has a mandate as the elected leader of the country, the chief ministers of states have a Constitutional mandate which must be recognised.

India is a federal country and the spirit of the Constitution must be respected, he said.

Hitting out at the Central government, he said India’s tragedy is that a continental size country of this vastness and diversity is sought to be “micromanaged” during the unprecedented crisis of a pandemic.

“Centralisation of authority and decisions in one or two offices led to disastrous mismanagement,” he alleged.

Commenting on the vaccination drive, he said it is in a shambles and people are suffering because of this.

“In a democracy, questions will be asked and those in authority made accountable. There is no wisdom in denials and challenging scientists and epidemiologists,” he said.

Sharma, a member of the group of 23 leaders who had demanded an organisational overhaul within the Congress, said it is unfair to pass the buck and blame states which were “left powerless as all decisions made by Central government”.

He said that asking states to import vaccines directly is not bearing fruit.

“In a global crisis, how can the states be asked to import vaccines? Import-Exports, Customs and Trade policy are central subjects.”

Talking about the various mutants of the virus, he said that in a country of 140 crore people, there will be mutations and variants as viruses do changes in countries big or small.

“Community transmission is a reality as the raging fires in villages confirms our worst fears,” he said, and added only science can meet this challenge.

India is proud of its scientists and the capability of its institutions, he said.

“Acceptance alone can help in course-correction. Accelerated universal vaccination, devolution, empowering the states and investing in public health infrastructure alone can meet the challenge,” he said.

The daily count of coronavirus cases in the country fell below the 2-lakh mark after over a month taking the total tally of COVID-19 cases to 2,69,48,874, while the death toll rose to 3,07,231, according to the Union Health Ministry.