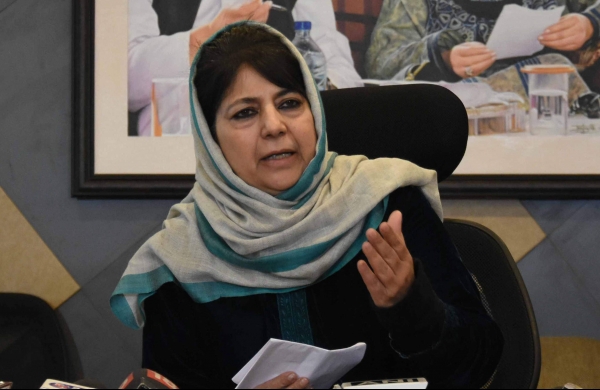 By PTI
SRINAGAR: PDP chief Mehbooba Mufti on Wednesday said the arrest of her party’s youth wing president Waheed ur Rehman Para was emblematic of the situation of Kashmiri politicians who she claimed were being “persecuted” by the Centre for not toeing its line.

Para was arrested on November 25, 2020 in connection with the Naveed Babu-DySP Davinder Singh case for supporting the Hizbul Mujahideen terror group.

Para, who had filed his nomination papers before his arrest, was elected to the District Development Council from Pulwama while in custody.

He has not been administered oath as DDC member so far. He was granted bail by an NIA court earlier this month but has been taken into custody by Counter Insurgency Kashmir (CIK) wing of JK police.

“Waheed’s persecution by the Indian government is emblematic of the situation that Kashmiri politicians find themselves in today.

Disliked & mistrusted by people in J&K for their faith in Indian constitution on one hand & punished by GOI for not toeing their line on the other,” Mehbooba said in a series of tweets.

The PDP president gave a personal rendition of Para’s initiation into politics.

“PDPs @parawahid arrested immediately after filing his DDC nomination hails from a family where his grandfather would unfurl the Indian flag when not many Kashmiris would do so.

Waheed’s interest in politics started at a young age,” she tweeted.

“As a child he’d visit the local MLA’s house & listen to political conversations with rapt attention.

His mother was scared that one fine day he’d pursue this passion for politics & become a target for militants.

Sadly this fear consumed her & she died when Waheed was a teenager,” the former chief minister of erstwhile Jammu and Kashmir state said in the longish thread.

She said the system in which Para had placed his faith was going after him with a vengeance.

“Today the very same system that he placed his faith in is going after him with a vengeance.

Waheed despite being in illegal detention lasting a year fought & won DDC elections from jail.

Even after a strong bail order by NIA court he was rearrested by CIK on unknown charges,” the PDP chief tweeted.

“Not having any proof to substantiate these charges, GOI is on a spree where Waheed is arrested by one agency after another.

It is sheer political vendetta & an attempt to sabotage the life of a young & promising 32-year-old man,” she added.

Mehbooba said the judicial system was the last hope of the young politician.

“His last hope now rests on the justice system & I hope that truth & justice prevail,” she said.