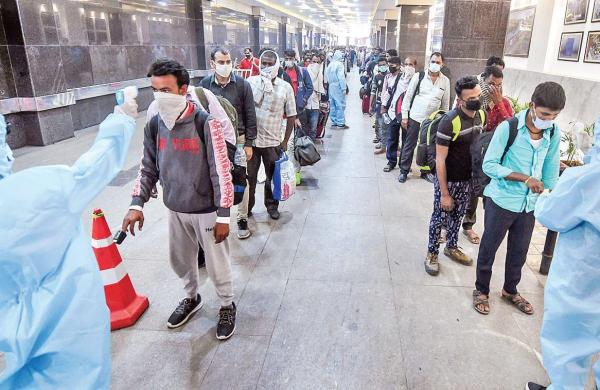 By Express News Service
NEW DELHI:  Tests will be mandatory on arrival for passengers coming from the UK, Europe and the Middle East, with the Centre issuing new guidelines for international flight arrivals after mutant variants of Covid from South Africa and Brazil were detected in India.

The new SOP will come into effect from February 22. The latest guidelines cover all international travellers coming or transiting through flights originating in the UK, Europe and the Middle East. Though no new strain has been detected in the Middle East, travellers from Brazil and South Africa transit through the region to reach India as there are no direct flights to the two countries.

The government has suspended international scheduled flights until February 28. Overseas flights are currently operated as per air bubble agreements with various countries. “All international travellers arriving in India will have to present a negative RT-PCR test, conducted not more than 72 hours before undertaking the journey,” said the guidelines.

For travellers coming from destinations other than the UK, Europe and the Middle East, this condition will be waived if they are travelling due to exigent circumstances, it said. All the airlines were asked to segregate passengers originating from the UK, Europe and the Middle East to facilitate authorities in following due protocol. Such passengers will mandatorily be subjected to a self-paid confirmatory molecular test, the Health ministry said.

The advisory added that in case any person arriving from these countries tests Covid positive, samples will be taken for genome sequencing of the strain. If they are found to be infected with a variant strain, their treatment will be done in separate isolation as per the protocol.

India gets 3rd most Covid jabsIndia is now third in Covid vaccinations after the US and the UK with the number of people who have received the first shots against coronavirus crossing 94 lakh mark. The daily Covid positivity rate has seen a constant decline in the last seven days —it has now dropped from 1.89% on February 1 to 1.69% on Thursday.