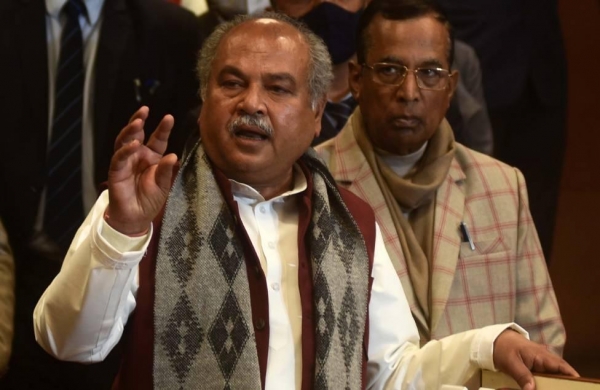 By PTI
NEW DELHI: The Centre followed “due procedure” before bringing the three new agri laws, and held consultations with states and farmers for facilitating barrier-free trade in farm produce to provide choice to the farming community, Parliament was informed on Friday.

“Due procedure had been followed while formulating the Ordinances/ Bills,” Agriculture Minister Narendra Singh Tomar said in a written reply in the Rajya Sabha.

K C Venugopal from Congress and Binoy Viswam from CPI had asked the government to share the pre-legislative consultations followed before bringing the three farm laws and also the number of individuals/organisations/unions consulted for the same.

Citing reasons for “urgency” to promulgate the three Ordinances in June 2020, Tomar said due to disruption of markets and supply chains during the COVID-19 lockdown, there was “utmost need to allow free direct marketing outside the mandis to facilitate the farmers in selling their produce near to farm gate at remunerative prices.”

“As COVID-19 situation may have a prolonged effect globally on demand side, hence the urgency for promulgation of…Ordinances, to provide a new facilitative framework to promote barrier free inter-state and intra-state trade to increase market accessibility for farmers to enhance their income,” he said.

Further, the minister said the draft of the Ordinances had been circulated to various ministries, Niti Aayog, among others, for their comments.

“State governments were also consulted through Video Conferencing (VC) on 21st May, 2020, which was attended by the officials of States/ UTs, to obtain feedback on new legal framework facilitating barrier free inter-State and intra-State trade in agriculture produce to provide choice to farmers,” he noted.

In view of the COVID-19 situation, the government had also “proactively” undertaken many webinar interactions with farmers and other stakeholders on new farm laws during the period from June 5, 2020 to September 17, 2020, Tomar said.

Based on the suggestions and feedback received from stakeholders such as farmer unions, the definition of “farmer’ has been amended in Para (b) of The Farmers’ Produce Trade and Commerce (Promotion and Facilitation) Act, 2020 and Para 2(e) in case of The Farmers (Empowerment and Protection) Agreement on Price Assurance and Farm Services Act, 2020, he added.

Responding further to CPI leader’s query on the consultation process followed, Tomar said there has been continuous demand for reforming the agriculture marketing system in India to facilitate farmers in selling their produce for better price realisation, as has been suggested from time to time by various committees.

“Government of India has been actively and intensively engaging with the states/Stakeholders for about two decades for reforms in agriculture marketing sector to provide accessible markets and barrier free trade facilitates for selling their produce at better price anytime anywhere,” he said.

The government had promulgated three Ordinances on June 5, 2020 and subsequently enacted these into Acts on September 27 last year.

The minister said the government has “proactively” undertaken efforts on series of extension activities through webinars, online conferences, workshops, teleconferencing, social media, print media, electronic media with the stakeholders on the three Ordinances and thereafter on the respective Acts.

Responding to a separate query, Tomar asserted that these three new laws will benefit farmers.

However, some of the farmers’ unions have been agitating against the newly enacted farm laws and their main demand has been repeal of these legislations, he said.

He said the government has engaged itself actively and constantly with the agitating farmers’ unions and 11 rounds of negotiations were held with them to resolve the issues.

During the various rounds of negotiations, the government has been requesting the agitating farmer unions to discuss the farm laws clause by clause in order to resolve their concerns on the clauses bothering them, he said.

The government had further explained during the meetings the benefits, including legal validity pertaining to the recently enacted new farm laws.

“However, farmers’ unions never agreed to discuss the farm laws excepting for demanding their repeal,” he added.

Thousands of farmers, especially from Punjab, Haryana and parts of Uttar Pradesh, are camping at various Delhi borders seeking repeal of the three laws for over two months now.