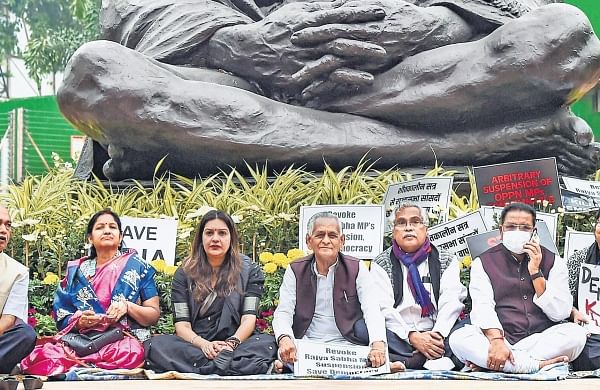 Rajya Sabha saw repeated adjournments on Wednesday, with Chairman Venkaiah Naidu saying that suspended members have no remorse. He reiterated that these MPs did everything unparliamentary and there is no question of revoking the suspension. “It is a sacrilege of the House and what can we do?” he said.

Sources said the Upper House is expected to witness similar scenes in the coming days.Suspended MPs sat in protest at the Gandhi statue, while MPs from various parties joined them. It turned out to be an embarrassing situation when Lok Sabha Chairman Om Birla led a Mongolian parliamentary delegation on a tour of the Parliament compound and could not take the visiting delegation to the Gandhi statue where suspended MPs sat with placards saying ‘democracy killed’ and ‘save democracy’.

The suspended MPs were quick to call out and wave at Birla, who briefly smiled and waved back.   A senior Congress leader said there has been no effort from the Centre to break the logjam. “We have repeatedly requested the Chair and even Leader of Opposition Mallikarjun Kharge has written to him but the Chair is not ready to accept it. We will continue with our demand. There is no question of apologising.”As the House met post lunch, Kharge again raised the matter but the Chair asked Union Water Resources Minister GS Shekhawat to table the Dam Safety Bill, 2019 before adjourning for the day.