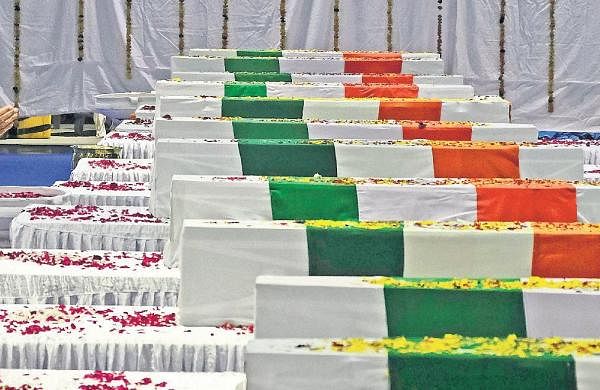 “With high-end technologies, vulnerabilities like external interference have crept in. The ill-fated Mi-17V-5 helicopter is one of the most sophisticated helicopters in the world. Every aspect will be looked into, including that of sabotage,” said a senior IAF officer on condition of anonymity.

Air Chief V R Chaudhari flew into Wellington hours after the tragedy and inspected the wreckage on Thursday. The probe team retrieved parts of the crashed helicopter, including its black box, and sent them to Delhi. Some blood samples were also lifted from the site. Air Force personnel also flew a drone over the area to get a 360-degree view of the site.

As the bodies of Gen Rawat and 12 others were transported by road from the Madras Regimental Centre at Wellington in Coonoor to Coimbatore’s Sulur airbase, people stood on either side and paid floral tribute. From Sulur, the mortal remains were flown to the Palam airbase in New Delhi, where President Ram Nath Kovind and Prime Minister Narendra Modi paid respects. The last rites of Gen Rawat and Brig Lidder will be held at Brar Square Crematorium in Delhi Cantt on Friday.

Close family members are being brought to Delhi for positive identification of the bodies and DNA testing. The mortal remains will be kept at the mortuary of the Army Base Hospital till the identities are established.

A 19-second video, believed to capture the moments before the crash, went viral and the Nilgiris police questioned those who recorded it. In the video, a group of people, believed to be tourists, is seen walking on a railway track looking towards the sky as a loud thud is heard and a chopper is seen disappearing into the thick fog. One person in the group is heard asking “odanchinducha (has it broken)?”. In response, the man recording the video is heard saying “yes”. Sources said the video might have been shot from near the Runnymede railway station. “If it was indeed recorded from there, it could be a vital piece of evidence regarding the weather conditions at the time,” sources added.