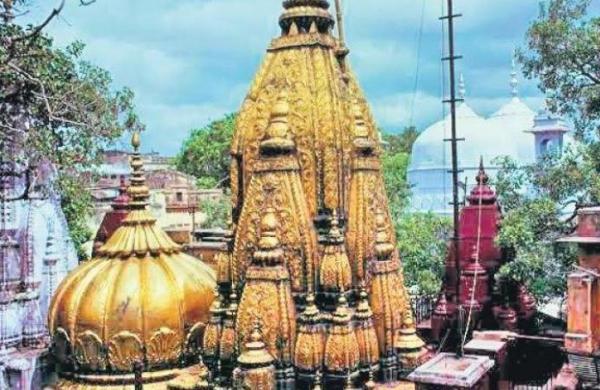 Express News Service
LUCKNOW: In a major development on Friday, a suit was filed in a Varanasi court seeking restoration of pooja and darshan at an ancient temple on the premises of the Gyanvapi Mosque complex adjacent to Kashi Vishwanath temple.

The suit was filed for restoration of darshan, pooja, aarti, bhog, and performance of rituals at ‘sthan’ of Lord Adi Visheshwar and of Goddess Maa Shringar Gauri and other deities within this temple complex.

The suit would be placed before the court of the civil senior divisional judge for the hearing, said the petitioners’ lawyer HS Jain, who is also involved in moving the petitions pertaining to Krishna Janmabhoomi in Mathura.

The lawyer for the Anjuman Intazamia Masjid’s Committee of Management was also present in the court from the respondents’ side and sought time to file a counter affidavit in the case.

“It is a title suit,” said the petitioners’ lawyer. Property in question is the temple complex known as “ancient temple” existing at settlement plot No. 9130within the area of Dasaswamedh in Varanasi. The plaint has been filed through 10 individuals acting as next friends of the deities within the precincts.

Allahabad High Court has already seized the matter and it is hearing a similar case on a day-to-day basis.

The Jyotirlinga, present on the same complex (Kashi Vishwanath temple), was damaged in 1669 during the rule of Mughal ruler Aurangzeb but other deities continued to exist within the temple complex which, the Muslims claim to be a part of the Gyanvapi mosque, the petition says.

It says that the ownership of the entire property in the periphery of five ‘kos’ rests in the Asthan Adi Visheshwar and the deity is the owner of the entire land. Forced possession of the religious place cannot change the nature of the property and ownership rights of the existing deity. Petitioners also sought the court to declare that the property belonged to the deity.

The suit was filed by lawyer Ranjana Agnihotri on behalf of Goddess Maa Shringar Gauri as her devotee and next friend, Jatinder Singh ‘Vishen’ as a devotee and next friend of Asthan Lord Adi Visheshwar, Jyotirlinga in the radius of five ‘kos’, situated in city and district of Varanasi and eight others including JanUdghosh Sewa Sansthan, a society registered under the Societies Registration Act, in Lucknow making Union of India, Government of UP, State of UP, District Magistrate, Varanasi, SSP, Varanasi, UP Sunni Central Waqf Board, Committee of Management Anjuman Intazamia Masajid, and Board of Trustees of Kashi Vishwanath Temple as a party.

The petition said that every individual had the right to perform pooja and rituals as per the tenets of his religion under Article 25 of the Constitution of India. Any obstacle in this would mean denial of one’s fundamental right to religion.