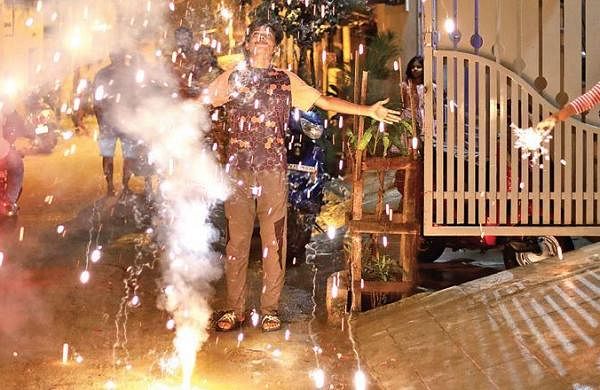 NEW DELHI: There cannot be a complete ban on firecrackers and the mechanism to stop their misuse has to be strengthened, the Supreme Court said on Monday setting aside the Calcutta High Court order banning firecrackers during Kali Puja, Diwali, and other festivals this year to check air pollution amid the Covid pandemic.

A special bench of Justices A M Khanwilkar and Ajay Rastogi also asked the West Bengal government to explore the possibility to ensure at the entry point itself that the banned firecrackers and related items are not imported into the state.

“There cannot be a complete ban on firecrackers. Strengthen the mechanism to supervise and see that misuse is stopped,” the bench observed, adding that this is not a new issue and it is the executive which has to take a call on the issue.

While setting aside the high court’s order, the Supreme Court also gave liberty to any party to approach the High Court with adequate materials. “For the time being, we only reiterate the position recorded in the order of the Supreme Court on 29th October 2021. Additionally, the State of West Bengal will explore the possibility of ensuring that no banned materials are imported. The mechanism may be strengthened,” the top court said.

The bench, which assembled during the Diwali break, was hearing the pleas against the October 29 order of the high court banning the sale, use, and purchase of all types of firecrackers in the state.

“The state should ensure that there is no use or display or bursting of firecrackers of any type at all during Kali Puja, Diwali celebrations as well as Chhath Puja, Jagadhatri Puja, Guru Nanak’s birthday and Christmas and New Year’s Eve celebrations this year,” the high court had said.

Only wax or oil-based diyas may be used for the occasion, it had said.

At the outset, senior advocate Siddhartha Bhatnagar, appearing for the association of dealers, referred to the 2020 orders of the National Green Tribunal allowing the use of green crackers.

He also pointed to the recent order of the apex court which said there is no total ban on the use of firecrackers and only those fireworks are banned which affects the health of children, senior citizens.

“This is the situation. Green crackers are not banned. We will strictly go by the direction of the Supreme Court and the NGT,” he said.

The apex court, however, said the practical difficulties are for the executive to keep in mind.

The high court has not defined what practical difficulty except saying that implementation will be difficult.

Senior advocate Gopal Sankaranarayanan told the apex court that he appears for the petitioner Arjun Gopal in the ongoing case in the apex court on firecrackers.

“I need to give your Lordships a background. We found that the manufacturers were constantly manufacturing non-green crackers. The apex court records this and notices this in the recent order dated October 29,” he said.

“CBI had found that several kilograms of barium, which is a banned substance, was being used by the firecracker manufacturers. Implementing agencies lack the desire to implement the directions of the Supreme Court,” he quoted from the apex court order.

Senior advocate Anand Grover, appearing for West Bengal, said the state has been complying and enforcing the orders of the apex court.

“There is a mobile application available like a road traffic app. The police scan the barcode through the application to find out the genuineness of the crackers. The state police have been active. This issue has come out of the blue in the judgment,” he said, adding that there is an unreasonable apprehension of the high court on the issue of implementation.

The top court in its order said, “The state submits that officials are taking necessary steps to ensure that directions issued by this Court are complied with in letter and spirit. We set aside the impugned order and permit any person interested to approach the High Court by placing all relevant materials.

“It said the high court proceeded to pass a blanket order by being influenced by practical realities and lack of mechanism placed by the state before the court as to how the sale/burst/ lighting of only green crackers which are duly certified can be allowed.

“This aspect, as it is stated, was never debated during the course of the argument. Mr Grover on instructions submitted that had the court called upon the parties to explain the position, the state govt as well as the state pollution control board would bring all aspects of the matter to the attention of the court.

“We do not deem it necessary to dilate on this aspect as we are convinced that if the HC wanted to impose complete ban should have called up on the parties to offer an explanation about the aspects which weigh in to pass such an extreme order and departure from the consistent view by this court on October 29, 2021,” the bench said.

The apex court said it has reiterated the regime delineated by the NGT in respect of manufacture and sale of firecrackers in its earlier order.

“This departure from that regime, something different, has to be pointed out at the ground level including inaction of the executive at the ground level. The State submits that officials are taking necessary steps to ensure that directions issued by this Court are complied with in letter and spirit. If there is any inaction on the part of the officials concerned, appropriate remedy will be taken in the matter. We accept this assurance. We set aside the impugned order and permit any person interested to approach the High Court by placing all relevant materials,” it said.

The authorities concerned shall abide by the set regime, it said.

“Additionally, West Bengal may explore the possibility of ensuring that no import of banned firecrackers or related items within the state at the entry point itself. That mechanism can be strengthened in addition to the strict supervision and verification at places where the trading of firecrackers occurs,” the bench said.

In its order, the high court had said that the expression firecrackers will cover all types of sparklers as well as other similar materials, whether or not their bursting or burning involves any sound or light generation.

“The state should ensure that there is no use or display or bursting of firecrackers of any type at all during Kali Puja, Diwali celebrations as well as Chhath Puja, Jagadhatri Puja, Guru Nanak’s Birthday and Christmas and New Year’s Eve celebrations this year,” the high court had said.

It had said that only wax or oil-based diyas may be used for the occasion.

It had directed the police to maintain a strict vigil to ensure that there is no further sale or purchase of firecrackers and take appropriate measures against those found violating the order.

The petition in the high court had claimed that the bursting of firecrackers of all classes will severely endanger the right to life of the citizens of the state, particularly in view of the worsening pandemic situation, as it would increase air pollution.

It had sought a re-imposition of the ban that the court had ordered before Diwali and Chhath in 2020.

On October 29, the apex court had said celebration cannot be at the cost of others’ health and clarified that while there is no total ban on the use of firecrackers, fireworks that contain Barium salts are prohibited.

Warning that top officials at various levels “shall be held personally liable” for any lapses, the apex court had said it is unfortunate that despite various directions issued by it there is a blatant violation going on.