Campaigning ends amid intense battle between BJP, TMC ahead of phase IV 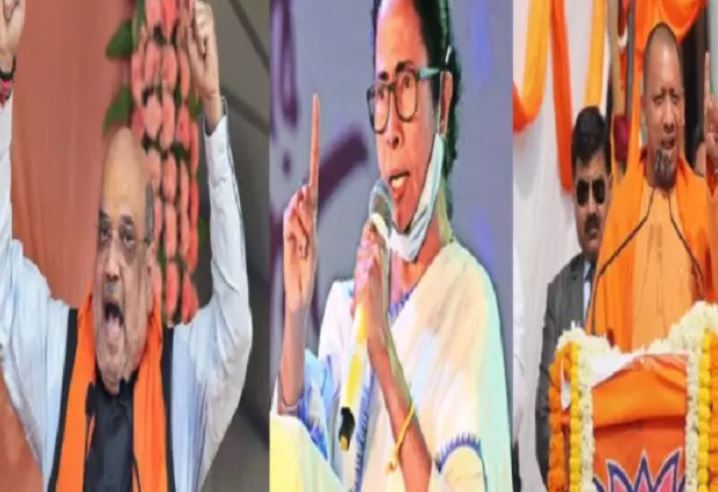 The high-decibel campaigning for the fourth phase of the West Bengal Assembly elections came to a close after witnessing an intense tussle between the ruling Trinamool Congress (TMC) and the Bharatiya Janata Party (BJP).

While Chief Minister Mamata Banerjee was mostly the only big face for the ruling party during the campaigns, BJP brought out its big guns to give the TMC supremo a tough competition, with UP Chief Minister Yogi Adityanath, national president of the party JP Nadda and Home Minister Amit Shah campaigning all out. Voting for the fourth phase of the West Bengal Assembly elections will commence on April 10, covering 44 constituencies in five districts – Cooch Behar, Alipurduar, South 24 Parganas, Howrah and Hooghly.

Ahead of the upcoming phase, Shah held several high-profile roadshows in West Bengal, which witnessed massive crowd turning the electoral fever in BJP’s favour. The Home Minister was also seen having a meal at a rickshaw puller’s resident in Domjur.

“I visited only one gram panchayat, but the kind of enthusiasm that I saw there I am confident that Rajib Banerjee will win with a majority,” he said.
The Uttar Pradesh Chief Minister announced that after BJP clinches victory in the elections, the party will create ‘anti-Romeo’ squads and put ‘TMC Romeos’ behind bars.

To safeguard the interests of sisters and daughters, BJP will create Uttar Pradesh-like anti-Romeo squads in Bengal and put all TMC Romeos behind bars,” he said while addressing a public meeting in Hooghly on Thursday.

Amid his tirade of attacks against the Bengal Chief Minister, Adityanath questioned why Banerjee was irritated with ‘Jai Shree Ram’ slogans, saying that “anyone who dares to fight Ram has to face bad results”.

“On May 2, Bengal will get freedom from the TMC government. TMC goons will be taken by the law. Surely, the parties like Congress, CPM and TMC will definitely give protection to the criminals, but they will be sent behind the bars,” he said, adding that Banerjee herself will start chanting ‘Jai Shree Ram’ after the results.

Meanwhile, Nadda also intensified the attack against TMC by saying that the state has decided to give Mamata Banerjee some rest by giving BJP a chance to serve people here.

“The gathering at this event indicates that the people are eager to bring BJP into power in the state. They are saying that ‘Mamata ji ko aaram do… BJP ko kaam do’ (Give Mamata ji some rest and let BJP work),” he said.