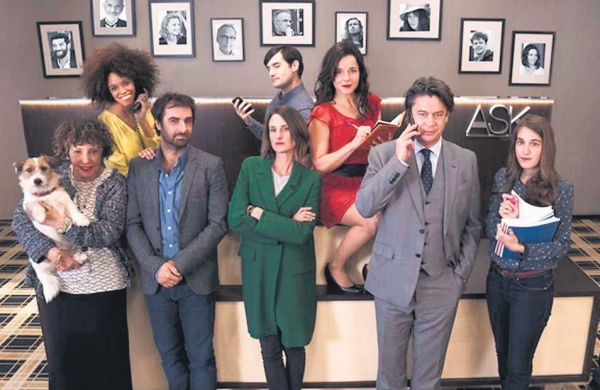 Express News Service
Twice across four seasons of French series Call My Agent, Annick Valentini tells her daughter Camille (Fanny Sidney) that work shouldn’t become torture. “Don’t forget to live, otherwise what’s the point?” The first time, Camille is a rookie assistant and the second is when she’s a junior agent at ASK, the ever sinking but reputed talent agency in Paris.

The series might be about cinema — with popular actors making cameos as themselves — but it treads this mirage called work-life balance like it’s any other industry. The agents, the assistants and bosses all love cinema, it is part of their DNA and it is part of the show’s DNA — it’s not for nothing that Monica Bellucci wishes to date a regular man and to meet him, goes under the blonde wig and guise of Chantal. “It sounds like a regular woman,” she says.

It could be a hattip to Chantal Akerman and her women (or not) but the pleasures of Call My Agent do not rely on the cinema world, but instead attempt to transcend it. It rations its mining of cinema’s romanticism while giving us a closer look at how regular the job can be with familiar prejudices, problems, and the stress and danger of burnout. And cinema feeds into this theme almost in a counterintuitive fashion.

It’s a medium revered by those with passion and gusto, that sentimentalises slumming it out and survives on magic. Orson Welles was a believer in magic — sparkle on screen can occur by chance or by sleight of hand. Call My Agent doesn’t disabuse us of this notion, but goes further to establish that cinema can be a job too. It can depict life to near perfection onscreen while sucking the life of those behind it. An aging actor, who could suffer a minor stroke any moment, can make an unprecedented script change while filming, create something lasting and nobody – including the filmmaker — can tell if it was his original idea or a momentary lapse in judgement.

Scripts, neatly bound, can lie around in bespoke furniture in agencies, their destiny a gamble or worse, the worth miscommunicated. Sometimes the job of an agent too solves itself or winds up into a knot purely by chance, an audition mix-up leads to finding the perfect actor and the discovery of a star isn’t too different from location recce. The show is pure in ways self-reflexive art rarely is – it doesn’t get bogged down by cliches of actors’ and directors’ whims and mood swings. It can also depict an aging actor confronting his mortality or a physically injured Charlotte Gainsbourg making the night of a mentally exhausted greenhorn at Cesar awards – “Film is serious business and nobody is nice.”

How does one balance the rigors of cinema and family? Ask Andrea Martel (Camille Cottin), whose initial capriciousness is reason for both her allure and her antipathy, deconstructed with love and hurt by her partner Colette (Ophélia Kolb). The Bellucci episode is a synagogue for Akerman, the episode going from mere name drop to Andrea’s reconciliation with her familial confinement, something she’s forced to learn on the job. The nature of her job and how good she is in it are probably why she seems disenfranchised when it comes to domesticity.

It’s a line of work where sharks pretend to be nice and nice people pretend to be sharks, only to fail miserably. Like Gregory Montel’s Gabriel Sarda, the hirsute agent who is overawed and unable to keep up with Isabelle Huppert’s energy and instead finds an unlikely partner in an inexperienced YouTube millennial-star, both realising that they’ve just not lived enough or had varied enough experiences for the work they do. Artistes can behave like children and it is the job of the agents to parent them. Agents switch comfortably between mentoring their juniors and ordering them around.

The dynamic is two-fold — mentor and mentee or parent and child. Rarer still is the case of Sigourney Weaver when the artiste becomes the remote control, the one calling the shots and her agent — Andrea — going with the flow. Or in the complicated case of Matthias and Camille, both. The father-daughter duo become the show’s pivot, the agent-artiste relationship not too dissimilar to that of a father and his love child, in an attritional tug-of-war, giving in to whims and instincts, or even the holy grail -— acknowledging the relationship in the open. Maybe that’s why the series’ longest-running gag is how every fictitious young male director appearing in the show is modelled after Xavier Dolan with all his Oedipal streak, finally getting a shoutout in the final season with an awards night presentation gaffe.