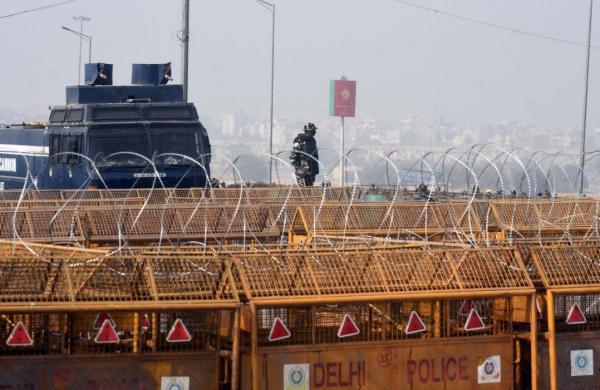 By PTI
NEW DELHI: It was business as usual at the Singhu border as national and state highways across the country barring Delhi, Uttar Pradesh and Uttarakhand observed a three-hour ‘chakka jam’ on Saturday.

The protest site on the Delhi-Haryana highway, the epicentre of the ongoing farmers’ agitation, saw routine everyday activities like preparation and distribution of langar food, farmers making motivational speeches from stages, and tractors blaring rustic songs as the action shifted to the other national highways, albeit for a brief period in the day.

“We are happy to share the spotlight with other highways. We have been holding the fort for over two months and will continue to do so. It is good that today farmers from across the country are demanding the repeal of three farm laws,” said Manmeet Bajwa (34), who has been camping at Singhu for the past 20 days.

The Sanyukt Kisan Morcha, an umbrella body of the farmer unions protesting the three farm laws, on Friday called for roads and national highways to be blocked between 12 noon and 3 pm throughout the nation except in Delhi, Uttar Pradesh and Uttarakhand.

Singhu border, which looked more crowded than before as more tractors and farmers made their way to the protest site, witnessed a heightened vigil by the security forces on the occasion.

Drone cameras, multilayered barricades, nail-studded roads and barbed wires — now put atop the many heavy-metal barricades as well — were used as precautionary measures by the police to ensure that the kind of violence witnessed on Republic Day tractor parade is not repeated.

The strength of security personnel, including the Provincial Armed Constabulary (PAC) and Rapid Action Force (RAF), deployed at the site was also increased.

“I don’t know why they have to beef up the security to this level when we have said we won’t be observing the chakka-jam here. It only tells about the lack of trust between the administration and the farmers,” said Navjot Heer from Punjab’s Patiala district.

“And in case they are doing this to simply scare us down, then they can try as hard as they can but they just won’t succeed,” said the 25-year-old.

The ‘chakka jam’ was observed to protest the internet ban in areas near their agitation sites, harassment allegedly meted out to them by authorities, and other issues.

The three-hour event was held on Saturday amid tight security, even as there was no such event in the national capital which was turned into a fortress with heavy security deployment by the Delhi Police, paramilitary and reserve forces personnel to prevent any untoward situation.

The Delhi Police had also used drone cameras to keep a tight vigil at protest sites.

Ten Delhi Metro stations, including Mandi House and ITO, were closed for the duration of the ‘chakka jam’ from 12 noon to 3 pm, and reopened after the protest ended.

Around 50 people were detained near Shaheedi Park in central Delhi for allegedly holding an agitation in support of the ‘chakka jam’.

The Samyukt Kisan Morcha, an umbrella body of farmer unions protesting against the Centre’s three farm laws, had said on Friday that the protesters would not block roads in Delhi, Uttar Pradesh and Uttarakhand during the ‘chakka jam’, even as it asserted that peasants in other parts of the country would block national and state highways for three hours, but in a peaceful way.

However, in view of the Republic Day violence that had left 500 security personnel injured and one protestor dead, the Delhi Police had made additional measures, including tightening security and intensifying vigil across the city and its border points.

Security forces were deployed at important junctions across the national capital, including Red Fort and ITO, which had witnessed violence during the January 26 tractor rally organised by the protesting farmers.

Multilayered barricades, barbed wires and nail-studded roads at the protest sites were also part of the precautionary measures taken by the police force.

The police also monitored content on social media to keep a watch on those spreading rumours against the force, officials said.

Earlier in the day, the Delhi Metro Rail Corporation (DMRC), in a series of tweets, informed commuters that multiple stations have been closed.

The DMRC later tweeted that entry and exit gates of Vishwavidyalaya station were also closed.

In the evening, the Delhi Metro stated that entry and exit gates of all 10 metro stations closed in view of ‘chakka jam’ had been re-opened, and normal service had resumed.

At all the three main protest sites, farmers camping there for over 70 days were busy with routine affairs and there was not much activity on Saturday.

Deputy Commissioner of Police (East) Deepak Yadav said although the protestors had maintained that they would not enter the national capital, the security force as a precautionary measure had made adequate arrangements to maintain law and order.

“There are additional deployment of pickets at all the border points. All vehicles are being checked thoroughly at the entry and exit points of pickets and borders. Additional buses had been taken and extra barricades put up at the picket points across the city,” he said.

Those coming to the stretch with their vehicles were politely informed about the protest and requested to turn back.

Biscuits and fruits were distributed to the protesting farmers.

“I came to the stretch at 11 am. There were very few people then, but in no time many started gathering and now it is full. The purpose is to remain peaceful and do just what is instructed to us by our leaders — block the road till 3 pm, ” Mukesh Sharma, a local farmer supporting the movement, said earlier in the day.

After the violence on January 26, Delhi Police Commissioner S N Srivastava had accused the protesting farmer union leaders of betrayal and breaching the agreement as thousands of peasants deviated from their pre-decided routes for the tractor parade.

Tens of thousands of farmers atop tractors had broken barriers, clashed with police and entered the city from various points to lay siege to the Red Fort on Republic Day.

The MHA ordered the first suspension of internet connection amid the ongoing farmers’ protest on January 26, when farmers’ tractor march led to a violent stand-off between protesters and the Delhi Police.