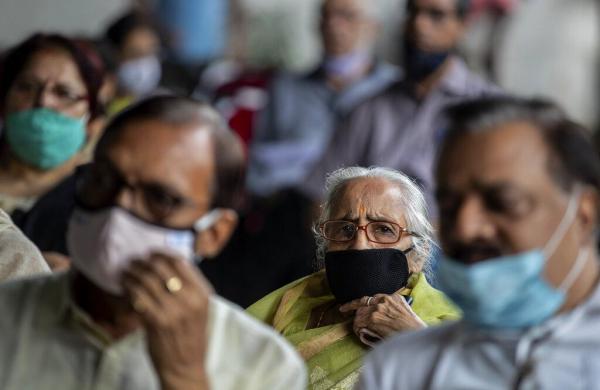 By PTI
AHMEDABAD: The Gujarat government on Wednesday said that as part of the measures to control the spread of coronavirus, it has decided to increase the number of daily testing and vaccination besides putting special focus on contact tracing and increasing the number of micro containment areas wherever necessary.

This was decided at a core committee meeting held to review the pandemic situation in the state on Wednesday under the chairmanship of Chief Minister Vijay Rupani.

It was held hours after Prime Minister Narendra Modi conducted a video conference meeting with the chief ministers on the issue.

During the meeting, it was decided to assign the responsibility of four metros in the state – Ahmedabad, Vadodara, Surat and Rajkot – to senior officers to offer guidance to the local bodies.

Rupani said that the number of COVID-19 tests will be increased and the vaccine doses will be given to three lakh beneficiaries everyday as against one-and-a-half lakh presently by increasing the number of centres and extending the timing till 9 pm, a release issued by the Chief Minister’s Office said.

“Special focus will be given to contact tracing and increasing the number of containment zones wherever necessary,” it said.

“In view of the increasing cases of coronavirus transmission in four metros in the state, the responsibility of these cities has been handed over to four senior officers on an urgent basis to offer guidance to the local bodies to control the infection and take treatment measures,” it said.

Amid the spike in COVID-19 cases, the Ahmedabad civic body has decided to shut its city bus service- AMTS and BRTS – from Thursday, said its PRO.

Gujarat Wednesday reported 1,122 new COVID-19 cases, out of which the four districts of Ahmedabad, Surat, Rajkot and vadodara alone accounted for 850 cases.

The Ahmedabad civic body on Wednesday announced the closure of the city zoo, lakefront and all public gardens here in view of the rising COVID-19 cases.

On Tuesday, the city recorded 241 new cases of coronavirus, a sharp increase from 40 cases reported a month back on February 16.

“It has been decided to close all the gardens, Kankaria Lakefront, zoo, etc from March 18 till further orders in view of the COVID-19 pandemic,” the Ahmedabad Municipal Corporation (AMC) said in a release.

The Gujarat government on Tuesday increased the night curfew timings in Ahmedabad and three other major cities — Surat, Vadodara and Rajkot — by two hours.

As of Tuesday, there were 60 ‘micro-containment’ areas (where a number of COVID-19 cases have been found) in the city, the civic body said.

The COVID-19 recovery rate in the city stood at 95.3 per cent, as per the civic body.

Meanwhile, the Surat Municipal Corporation on Wednesday issued a notification making seven-day home quarantine mandatory for people travelling to the city from outside Gujarat.

The notification, issued under provisions of the Epidemic Diseases Act, said if a person shows any symptom of the viral infection while in quarantine, he should immediately get tested.

“People coming to Surat city from outside Gujarat will have to undergo mandatory seven-day home quarantine and remain in isolation to prevent others at home from getting infected,” the notification said.

Those violating the order will face action under Indian Penal Code Section 188 (disobedience to order duly promulgated by public servant) and provisions of the Epidemic Diseases Act and the Disaster Management Act, it stated.

The civic body on Tuesday said people working in textile and diamond industries here are required to get themselves tested for the viral infection once a week.

In daily tests, majority of those found infected are associated with the textile business, it had said, adding that testing has been intensified in crowded places, including diamond and textile units and educational institutions.

On Tuesday, Surat reported 263 cases, the highest in the state, raising the infection count in the city to 42,979, according to the civic body.

The city’s recovery rate stands at 95.22 per cent, with a total of 40,924 patients discharged so far, as per official data.