Budget was for 1 per cent of population; gave wrong message to China: Rahul Gandhi 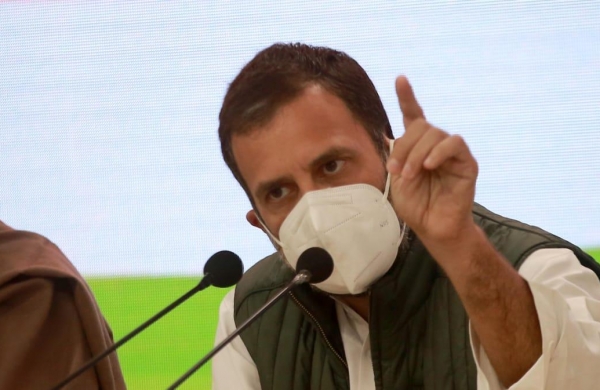 By PTI
NEW DELHI: Congress leader Rahul Gandhi on Wednesday strongly criticised the Union Budget, saying it was for one per cent of the population and gave a wrong message to China by not significantly raising defence allocation.

Coming down heavily on Modi, Gandhi alleged there was no leadership in the country.

“It (conditions) requires that the prime minister put money immediately into the hands of our people and revive the economy, it requires that he protects the small and medium businesses who give us jobs. It requires a clear message to China that ‘you cannot do this with us, you cannot be sitting inside our land and expect that nothing is going to happen,” he said.

Alleging that there is no leadership in the country anymore, Gandhi said, “There is just talk, there is no understanding, no strategy. What is there is a media that is controlled so the reality of what is going on is not coming out. This maya is going to break.”

Gandhi argued that what India needed was money in the hands of the people, asserting that the economy can be revived only through consumption and cannot happen from the supply side.

“My expectation from the Budget was that government will provide support to 99 per cent of India’s population. But this Budget is for one per cent population. You (the government) snatched away money from people in small and medium industry, workers, farmers, forces, and put it in the pockets of 5-10 people,” he alleged.

If the government would have introduced something like the proposed income guarantee scheme NYAY, given money to small and medium industries, protected them, economy could have been revived, Gandhi said.

“Economy will not get revived by the supply side. They are trying again and again and are giving money to one per cent of the population, but the economy will not revive. This is the reality,” the former Congress chief said.

“China enters into India and takes away thousands of kilometres of our land. What message do you give them in our budget– that we won’t increase our defence expenditure. You raised it by Rs 3000-4000 crore. What message did you give? ‘You can enter India and do whatever you want, we won’t support our defence forces’,” Gandhi said.

He said that jawans in Ladakh and air force pilots would be feeling that they are facing such an adversity, but the government is not giving them money.

“The money which belongs to the forces, it is being given to those 5-10 people. This will not benefit the country,” he said.

“The commitment of forces is cent per cent, the government’s commitment should be 110 per cent. Whatever our army, navy and air force need, the government should give them. What kind of patriotism is this that our army is standing in the cold in Ladakh and ‘you are not giving them money’,” Gandhi said.

The overall defence budget for 2021-22 was hiked marginally by around 1.4 percent but there was a nearly 19 per cent rise in capital outlay for military modernisation.

According to the 2021-22 budget documents presented by Sitharaman, the allocation for the defence services was increased to Rs 4.78 lakh crore compared to Rs 4.71 lakh crore in the 2020-21 budget.