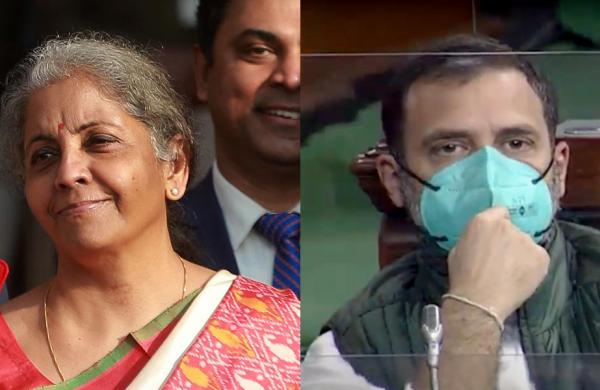 By PTI
NEW DELHI: Finance Minister Nirmala Sitharaman on Monday hit back at Rahul Gandhi’s claim that the Budget favours certain crony capitalists, saying Congress-ruled Kerala-government in the past had handed over a port in the state to the same businessman on invitation basis.

Soon after the Budget presentation, Congress leader Gandhi alleged that the Narendra Modi government plans to hand over India’s assets to crony capitalists through stake sale in public sector companies and financial institutions, including two PSU banks and an insurance company, in the next fiscal.

“Forget putting cash in the hands of people, Modi government plans to handover India’s assets to his crony capitalist friends,” he said after the presentation of the Union Budget. Responding to the comment of Gandhi, the Finance Minister said he repeats this particular question every 15 days.

ALSO READ| Budget has vision of ‘self-reliance’; Villages and farmers at its heart: PM Modi

“The party which even today does not know to explain if I take one example of Kerala under Congress giving away sea port development on invitation basis to one of the crony capitalists that he is talking about,” she questioned.

She referred to Congress-led Kerala government inviting Adani Group, who Gandhi referred to as crony capitalist friends of Modi government, to Vizhinjam Port in the state.

“Can he (Gandhi) explain as to how for developing Vinizam port a crony capitalist, I would not call him that but he uses that word, was invited by the Congress party….if he cannot answer that I think Rahul Gandhi should understand either understand nothing what he is speaking about or he is being ill-advised,” she said.

Unveiling the PSE policy in Budget 2021-22, the Finance Minister said barring four strategic areas, public sector companies in other sectors will be divested. The policy would give a clear roadmap for disinvestment in strategic and non-strategic sectors.