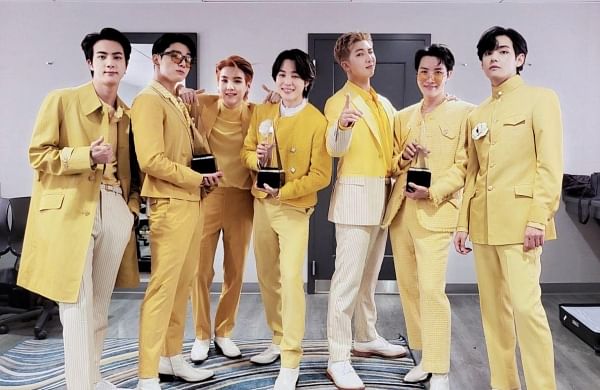 SEOUL: K-pop supergroup BTS won the most honourable prize at the 2021 American Music Awards (AMAs) for the first time as an Asian artist.

BTS won the ‘Artist of the Year,’ the most honourable prize at the AMA held at Microsoft Theater in Los Angeles on the 22nd (Korea Standard Time).

In this category, famous pop stars, including Taylor Swift, the most wins of the AMA (32 prizes), Ariana Grande, Olivia Rodrigo, Drake, and Weekend, were nominated. In particular, Swift is the strongest candidate who has received ‘Artist of the Year’ six times.

The ‘American Music Awards’ was BTS’s American TV debut stage, so their award of ‘Artist of the Year’ is more meaningful. In 2017, BTS performed ‘DNA’ at the AMA.

We won Artist of the Year, Favorite Pop Song, and Favorite Pop Duo or Group at the @AMAs tonight! We want to thank everyone who supported our music and especially #BTSARMY! We love youDon’t miss the rest of the show and our incredible performance! #AMAs #BTSxAMAs #BTS_Butter pic.twitter.com/ALT4QAdkrk
— BTS_official (@bts_bighit) November 22, 2021
BTS member RM said, “Very surprised, so I don’t know what to say. We’re truly honoured to be on this stage with amazing artists here. Four years ago, we had our first TV live performance at this stage, AMAs, for the song ‘DNA.’ We were so excited and nervous at the time, but nobody could have ever bet on the odds of us standing here receiving this award.” He said, “Except you all, Army.”

“With the love for music and support from all the ‘Army,’ seven Korean boys can stand here,” RM said. “This whole thing is a miracle, so we will never take this for granted. This honour is yours, and we appreciate to all staff at HYBE and Big Hit Music.”

“We wanted to give happiness with our music. And this award is the beginning of a new chapter that we will open,” Jungkook said. “There is a thing we’ve been learning for a few years. It is that every moment is precious.”

At the AMAs, BTS also won ‘Favorite Pop Song’ with their song ‘Butter’ and ‘Favorite Pop Duo/Group,’ receiving a total of three prizes.

As a result, BTS has won the AMAs for four consecutive years since 2018.

In particular, BTS swept all three categories they were nominated at the American Music Awards this year, achieving an all-time K-pop record.

On this day, BTS had two stages at the award ceremony. They performed the first in-person live stage of the collaboration song ‘My Universe’ with famous Britpop band ‘Coldplay.’ They also sang their global hit song ‘Butter’ as the last song of the award ceremony.

Interpreter and host Ahn Hyun-mo, who broadcasted the award ceremony on Watcha, the Korean OTT service, said, “Tonight is the ‘Night of BTS.'”

The American Music Awards is one of the most famous music awards in the U.S. along with the ‘Grammy Awards’ and the ‘Billboard Music Awards.’

This year, the winner was decided by popular vote without experts’ evaluation. Voting was conducted through TikTok, the most popular social media platform in the U.S., and BTS’ award is analyzed that the popularity in generation Z was reflected. BTS has amazing popularity among young local fans.