Brilliant Barcelona get the job done in Budapest 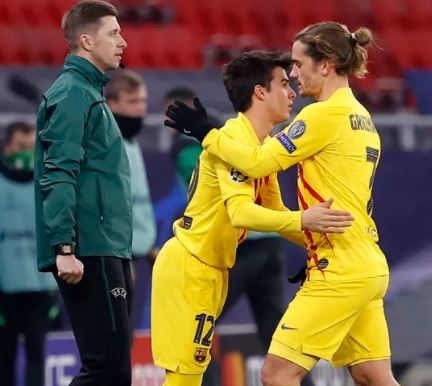 That’s as good as Barca have played all season and it was simply wonderful to watch. Breathtaking at times, particularly in the opening half hour, there was more than enough to get excited about.

Kudos to Ronald Koeman for picking an attacking line-up with a mixture of experience and youth that smothered Ferencvaros from the opening whistle.

Props too to the front three who, in this set up look solid as a unit and dangerous. We’ve spoken a lot about Martin Braithwaite on this forum recently, but I’ll make no apology for doing so again.

With goals comes confidence, and the Dane is certainly giving Koeman food for thought. On current form, there’s no chance he’s benched – no matter the opposition.

An exquisite backheel goal from Antoine Griezmann was the moment of the match and indicates that he too is starting to reap the rewards under Koeman’s system.There’s never been a problem with the Frenchman’s work ethic, but the lack of goals never matched the industry.

Ousmane Dembele is beginning to show the form that we all knew he could produce but rarely has since signing for the club. Injuries have been his biggest enemy, and if he’s able to get a run of games uninterrupted now, there’s no ceiling to what he can achieve.

Giving him the armband in the second half was a nice touch from Koeman, and hints at man-management skills par excellence. Dembele has often been accused of lacking motivation, and that carrot is a master stroke.