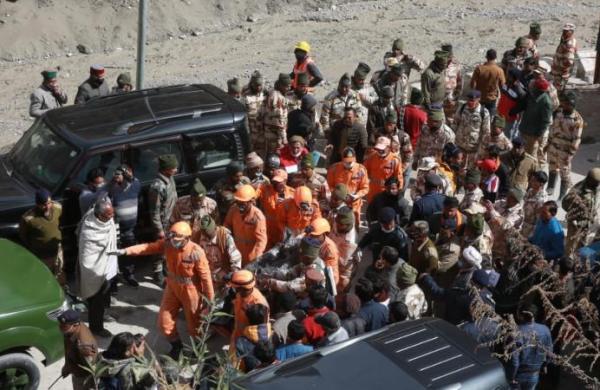 Around 25 to 35 people are feared trapped in the tunnel since the avalanche hit Joshimath area of Chamoli district on Sunday with rescue efforts by multiple agencies focused on reaching them as soon as possible.

The combined rescue team has reached up to 130 metres inside the tunnel but there is a lot of debris clogging it, he said.

People feared trapped inside the tunnel should be at around 200 metres, he said.

However, some feel that more sophisticated equipment should be engaged to expedite the rescue operations.

Kedarnath MLA Manoj Rawat said excavators and Pokland machines should be brought in to speed up the process.

Meanwhile, search efforts at the now demolished hydel project site at Raini also  picked up pace on Tuesday with heavy mechanical equipment tearing through the debris deposited there by the avalanche.

SDRF personnel have been able to throw ropes across the Rishi Ganga river and are installing trolleys there as an alternative arrangement to transport food and other essentials to the residents of villages cut off due to the washing away of three pedestrian bridges and a motorable bridge in the area.

Essentials are being supplied to these villages at present by helicopters.

Besides, people stranded in these villages are also being evacuated by helicopters.

Around 150 residents were evacuated from these villages on Tuesday by helicopters, Additional Information Officer Ravindra Negi said.