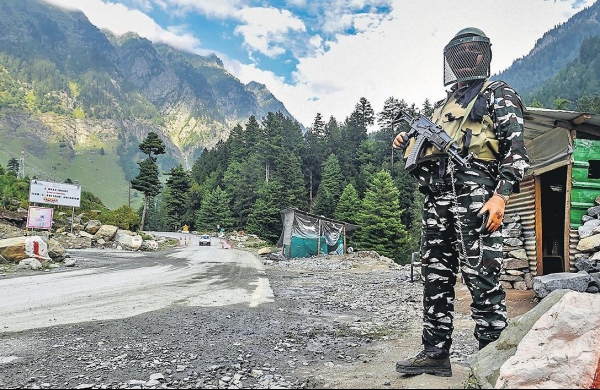 Express News Service
SRINAGAR: Relieved over the agreement between the armies of India and Pakistan to strictly follow the ceasefire accord, the residents of border areas in Jammu and Kashmir said it should be a permanent ceasefire. “The border ceasefire will bring a lot of respite to us. We could now move freely from our dhoks (huts) and do normal chores without any threat of facing Pakistani bullets, mortar and artillery shells,” said Imtiyaz Ahmad, a resident of Kamalkote, close to the Line of Control (LoC) in Uri sector.

Army displays ammunition recoveredfrom a terrorist hideout in Poonch | ptiSince Kamalkote is about 100 to 200 metres away from the LoC, it is always prone to shelling. “We are happy over the ceasefire agreement, but want it to be a permanent affair and not a temporary one. The ceasefire can lead to peace,” Imtiyaz said adding, “The cross-LoC trade should also be thrown open”.

Two residents of Kamalkote were killed and two others injured, one of them lost both legs, in heavy cross-LoC shelling on November 13 last year. Mohammad Yousuf Khan, sarpanch of Kamalkote, said cessation of hostilities along the LoC is a big relief. “We pray that both countries stick to the border ceasefire. It will allow us to start our normal chores of life without any threat or fear,” Khan said.

He said the administration should take this opportunity to construct underground bunkers so the villagers can take refuge in them in case of outbreak of hostilities in future. Mohammad Aslam, a resident of Salotri in Krishna Ghati sector of Poonch district, said if there is no shelling, they could do farming and graze their cattle. Aslam had lost three of his family members on March 1, 2019 cross-LoC shelling.

India and Pakistan’s decision to strictly follow the ceasefire was welcomed by the UN and the US. While UN Secretary-General Antonio Guterres said it was encouraging to note the steps announced by India and Pakistan along the LoC, the US called it a positive step towards greater peace and stability in South Asia. “The US welcomes the joint statement between India and Pakistan that the two countries have agreed to maintain strict observance of a ceasefire along the LoC starting on February 25,” White House spokesperson Jen Psaki said. “United Nations Secretary-General Antonio Guterres is “encouraged” by India and Pakistan`s decision to strictly observe all agreements on a ceasefire along the Line of Control (LoC),” UN Secretary General’s spokesperson Stephane Dujarric said.