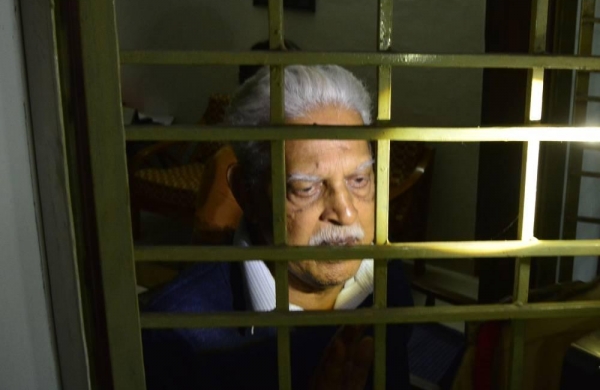 Express News Service
MUMBAI: The Bombay High Court on Monday reserved its order on the medical bail pleas of 81-year-old ailing Telugu poet and activist Varavara Rao, who is an accused in the Elgar Parishad-Bhima Koregaon case.

Rao, who suffers from several medical complications was arrested on August 28, 2018, and is currently recuperating in Nanavati hospital, after the High Court’s intervention in November last year.

His lawyers have sought for the octogenarian to be granted bail and sent back to his home, in Hyderabad, for at least three months, owing to his advanced age and neurological condition. While the National Investigating Agency (NIA) argued against setting him at liberty due to the serious allegations against him. They have, however, shown their willingness for him to be shifted to the prison ward of Sir JJ Hospital, where his condition could be monitored.

The division bench of Justices SS Shinde and Manish Pitale will also pass an order on Rao’s wife Pendyala Hemlatha’s petition for a declaration that her husband’s fundamental rights to health, dignity and life, and thereby his rights, under Article 21of the Constitution of India have been violated by prison officials.

Senior Advocate Indira Jaising appearing on behalf of Hemlatha said that Rao has spent 149 days of the 365 days in a year, in a hospital ward. “Life is dear to everyone, including a prisoner, and the court is here to protect it.”

As for the seriousness of the allegations, Jaising submitted, “It is a victimless crime, as not a single person is alleged to have been killed on account of violence unleashed by him.” She argued that the only allegation is that letters naming him have been recovered from the computer of a co-accused.

Rao was admitted to JJ Hospital, last year. However, after he tested positive for the coronavirus, he was shifted to St. George Hospital and subsequently to Nanavati Hospital, after the Human Rights Commissions intervention. He was finally discharged from the hospital in July, 2020.