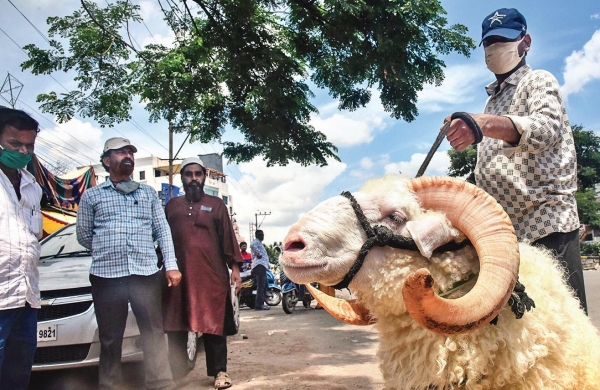 By PTI
MUMBAI: The Bombay High Court on Tuesday refused to interfere in the Brihanmumbai Municipal Corporation’s (BMC) decision to impose restrictions on the number of animals to be sacrificed at the Deonar abattoir in the city for Bakri Eid.

A bench of Chief Justice Dipankar Datta and Justice G S Kulkarni said that the state administration had imposed the restrictions keeping in mind the prevailing COVID-19 situation.

The bench was hearing a bunch of petitions seeking, among other things, that the BMC be directed to increase the number of animals to be sacrificed at the abattoir over the next three days.

As per the circular issued by the civic body on July 19, the Deonar abattoir will remain open between 6 am and 6 pm from July 21 to July 23, and 300 buffaloes or “big animals” will be permitted to be sacrificed on each of these three days.

The petitioners, however, sought that the BMC allow 700 to 1,000 big animals to be sacrificed per day for the next three days.

The High Court, however, asked, “Isn’t public health above religion?” “This is done keeping in mind the prevailing circumstances (the pandemic). Possibly next time. Otherwise, the administration will not be able to manage,” the court said. Senior counsel Anil Sakhre, who appeared for the BMC, informed the court that the restrictions on the number of animals to be sacrificed in the city had been imposed as a measure of “crowd control” at the abattoir.

“Last year, it was 150 animals per day, this year, 300 per day. People can come, offer sacrifice. This is to avoid overcrowding,” Sakhre said.

A decision to limit the timings and the number of animals to be sacrificed was taken by the state government on July 2 keeping in mind the COVID-19 protocols, following which, the BMC issued its circular.

“Now all the festivals are starting, for Hindus and Muslims. Ganpati and Navratri will also be there. We are taking these precautions for the third wave,” the senior counsel said.

The High Court took his submissions on record and said that the restrictions were the “decision of the executive”, and did not warrant any interference from the court.