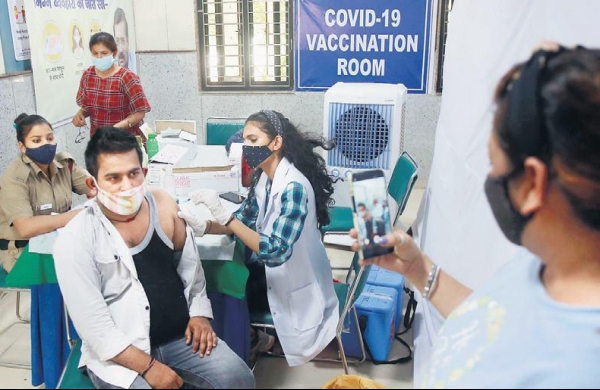 By PTI
MUMBAI: The Bombay High Court on Friday directed the Union government to approve the proposed plan of action of the Brihanmumbai Municipal Corporation (BMC) to re-vaccinate those citizens, who had fallen victim to several fake anti-coronavirus vaccination camps in different parts of the city a few months ago.

A bench of Chief Justice Dipankar Datta and Justice G S Kulkarni directed the Centre to approve the Mumbai civic body’s plan of action, “with or without modifications, within seven days” from now.

The directions came after senior counsel Anil Sakhre, who appeared for the BMC, told the HC that it had re-vaccinated 161 of the 2,053 people, who had fallen victim to such fake camps.

Sakhre had told the high court earlier this month that the victims had been administered saline water instead of the anti-COVID-19 vaccine.

“Of the 391 cases at Hiranandani in Kandivali, 363 people were traced and 161 of them were vaccinated. We are in the process of getting the remaining of the total 2,053 victims re-registered on the CoWin portal so that they can be re-vaccinated correctly,” Sakhre told the court.

He submitted the civic body’s plan of action that proposed, among other things, de-registering all such victims from the CoWin portal so that they can re-register on the portal afresh and get the correct vaccine administered.

Sakhre said that the victims could not get re-registered without the Centre’s approval.

At this, Additional Solicitor General Anil Singh, who appeared for the Union government, told the high court that although de-registeration from the portal was not possible presently, the Centre will look into it.

“For the time being, the victims can re-register on the portal for vaccination,” Singh said.

The HC then said that the Centre should have no objection to looking into the BMC’s plan.

“Consider BMC’s proposed plan of action and do the needful. The victims can perhaps be granted fresh registration (on the CoWin portal) with some remarks identifying them for re-vaccination,” the HC said.

The court also granted additional 30 days to the Mumbai police to complete its probe into the incident of one such fake vaccination camps held in a housing society in the Kandivali area in the city.

State’s counsel Aruna Pai had earlier told the HC that the first FIR in the fake vaccination camps was registered in May this year at Kandivali police station.

She had said earlier this month that a chargesheet was likely to be filed in the kandivali case soon.

On Friday, Pai told the HC that while the police’s probe into the Kandivali FIR was complete, it was yet to file a charge sheet since they were waiting for a “chemical analysis report” from the Haffkine Institute.

“No one involved in the scam should be let off. We direct the Haffkine Institute to provide the chemical analysis report to police as soon as possible,” the high court said.

“We grant the investigating officer 30 days as requested to complete the probe and place on record the probe report before this court,” it said.

The high court will continue hearing the plea on August 30.