Bodies pile up at crematorium in Germany’s coronavirus hot spot 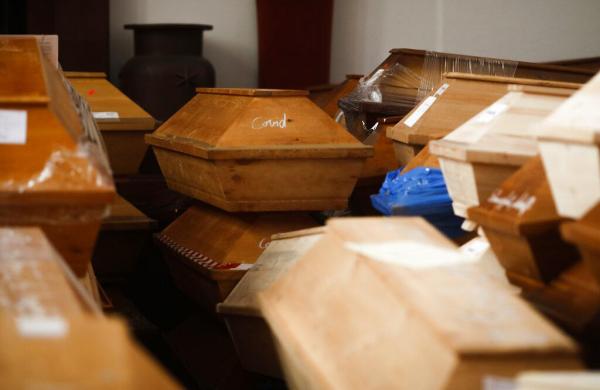 By Associated Press
MEISSEN: The caskets are stacked three high in the Meissen crematorium’s somber memorial hall, piled up in empty offices and stored in hallways. Many are sealed with plastic wrapping, others are labeled “infection risk,” “urgent” or simply “COVID.”

A surge of coronavirus deaths in this corner of eastern Germany has boosted business for crematorium manager Joerg Schaldach and his staff, but nobody is celebrating.

“The situation is a little bit tense for us at the moment,” Schaldach said as another undertaker’s van pulled up outside.

The crematorium would typically have 70 to 100 caskets on site at this time of year, when the flu season takes its toll on the elderly.

“It’s normal for more people to die in winter than in summer,” said Schaldach. “That’s always been the case.”

Now he has 300 bodies waiting to be cremated and each day dozens more are delivered to the modernist building on a hill overlooking Meissen, an ancient town better known for its delicate porcelain and impressive Gothic castle.

On Monday, Meissen county once again took the unwanted lead in Germany’s COVID-19 tables, with an infection rate three times the national average. The state of Saxony, where Meissen is located, includes six of the 10 worst-hit counties in Germany.

Schaldach says the crematorium is doing its best to keep up with demand, firing up the twin furnaces every 45 minutes and managing 60 cremations a day.

“The ashes still end up in the right urn,” he said.

But whereas staff would normally try to ensure the deceased look good for relatives to bid their final farewells, infection rules now mean the caskets of COVID victims have to remain shut throughout, making the entire process even harder for those involved.

“It’s our business, we’ve seen death many, many times,” said Schaldach. “The problem we see is that the grieving relatives need our help. And at the moment, there’s a greater need for words of consolation because they’ve given their deceased loved one to the ambulance and then they never see them again.”

Some have linked Saxony’s high infection rate to wider anti-government sentiment in a state where over a quarter voted for the far-right Alternative for Germany party at the last national election. Its lawmakers have objected to the need to wear masks, limits on people gathering and the closure of stores. A few have even denied the existence of a pandemic outright.

Other commentators have noted the state’s large number of elderly and its reliance on nursing home workers from the neighboring Czech Republic, where COVID-19 infections are even higher.

Officials in Meissen, including the head of the county administration, the local doctors association and the lawmaker representing the region in parliament, an ally of Chancellor Angela Merkel, all declined to be interviewed about the situation.

Saxony’s governor, Michael Kretschmer, acknowledged in a recent interview with daily Freie Presse that he had underestimated the impact of the pandemic in his state and paid too much attention to those calling for businesses and schools to remain open.

A video showing Kretschmer talking to anti-lockdown protesters outside his home Sunday ends with him walking away after one person dons a mask made to look like the German Imperial War Flag, a symbol favored by far-right extremists.

Schaldach, the crematorium manager, says most people in Saxony accept the rules. But he, too, has read comments on social media branding reports about bodies piling up at his crematorium as fake news.

“Those who believe in conspiracy theories can’t be helped. We don’t want to debate with them,” he told The Associated Press. “They have their beliefs and we have our knowledge.”

Down in Meissen, the streets are empty, devoid of the usual tourists or even the bustle of locals.

Franziska Schlieter runs a gourmet food store in the historic city center that’s among the few allowed to stay open amid the lockdown. Her store, which has been run by five generations of her family, is being sustained by a trickle of regulars buying lottery cards and gift baskets.

“In the Bible, God sent people plagues when they didn’t behave,” said Schlieter, who feels easing the lockdown over Christmas was a mistake. “Sometimes I have to think of that.”

On the cobblestone square, Matthias Huth tends a lone food truck outside his shuttered restaurant. He defends those who have questioned the government’s COVID-19 restrictions, but says skepticism shouldn’t justify denial.

“Conversations are starting to change,” Huth said as he served up a dish of chopped blood sausage, sauerkraut and mash known locally as ‘Dead Grandma.’ “Everyone wants it to be over.”