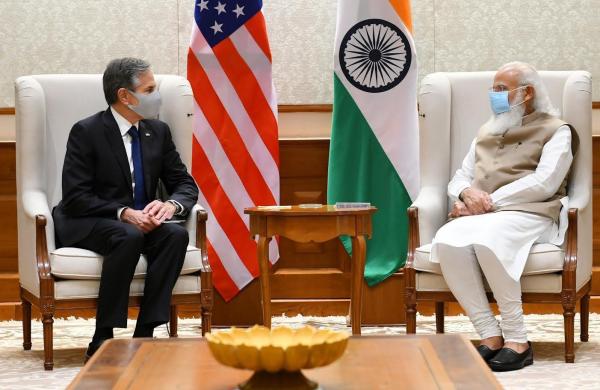 By PTI
NEW DELHI: US Secretary of State Antony Blinken on Wednesday announced that his country will provide USD 25 million to support India’s vaccination programme as the two sides held wide-ranging talks on further boosting cooperation in dealing with the pandemic and its adverse impacts.

At a media briefing after talks with Blinken, External Affairs Minister S Jaishankar thanked the US for its “truly exceptional” support to India during the second wave of the pandemic and for keeping the supply chain for raw material open for vaccine production in India.

Jaishankar also said that the travel challenges resulting from the coronavirus pandemic were also discussed.

Separately, at an event in the US embassy, Blinken said by the end of August, the mission plans to conduct 68,000 student visa interviews which would be the “highest” in years.

He said that there are few relationships that are more vital than the one between India and the United States and that his country will not forget the assistance provided to it by New Delhi in the early stages of the pandemic.

In a tweet, Blinken announced supporting India’s COVID-19 vaccination programme with an additional USD 25 million from the US government through the US Agency for International Development (USAID).

“Today, I’m proud to announce an additional $25 million from the U.S. government, through @USAID, to support India’s COVID-19 vaccination program. The United States’ support will help save lives by strengthening vaccine supply chains across India,” he tweeted.

In his remarks at the media briefing, Jaishankar said the Covid issue was “naturally a particular priority”.

“So let me first acknowledge the responsiveness of the Biden administration to keeping the raw material supply chain open for vaccine production in India and then say a big thanks for the support we received during the Covid second wave from the United States, a support that I would say was truly exceptional,” he said.

“We focus today on expanding vaccine production to make it globally affordable and accessible. We also discussed travel challenges resulting from Covid,” he said.

Jaishankar said the US has been very forthcoming on the issue of students. “I really appreciate all the trouble that the State Department and the Embassy has gone to in that regard and I very much hope, will take a sympathetic view of other travellers in the days to come,” he said.

At the event in the US embassy, Blinken said by the end of August it would conduct 68,000 student visa interviews. “You made a major push this summer for visas. As I understand it, by the end of August you will have conducted 68,000 student visa interviews, which is the highest in years. And again, to do that during Covid is extraordinary,” he said.

“We may end up sending more students to the United States this year than ever before as a result of your work. And that’s important in so many different ways, but it’s particularly important, I think to all of us, because this is where enduring connections are made between the United States and India,” he said.

“These are relationships that are going to be not just established now but will likely endure for years, for decades, for generations. Nothing could be more important,” the US Secretary of State added.

In his remarks at the media briefing, Jaishankar also said that the ability of India and the US to work more closely, bilaterally, in the Quad and elsewhere, benefits the international community as a whole.

“Developments in India’s extended neighbourhood are also naturally of great consequence to us,” he said.