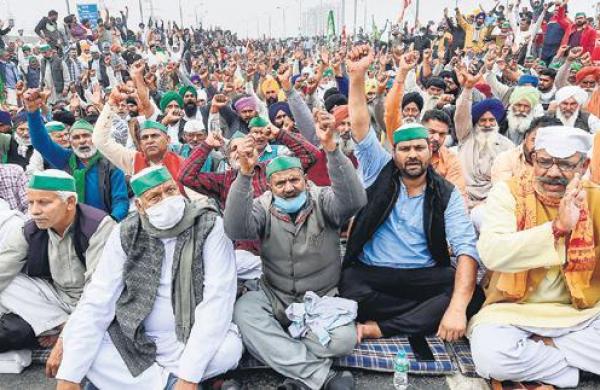 By PTI
GHAZIABAD: Hundreds of farmers stayed put at the Ghazipur border on Saturday morning, as more supporters poured in at the protest site on the Delhi-Meerut Expressway here.

The Bharatiya Kisan Union-led protest against the Centre’s new farm laws here looked like it was going slim on Thursday but more protestors have joined the stir, following a mahapanchayat of farmers on Saturday in Muzaffarnagar, while supporters also poured in from Haryana and Rajasthan districts.

Khatana, who is at the demonstration site with BKU leader Rakesh Tikait, said there has been continuous support for the “peaceful protest” against the farmers’ demand for removal of the new agri laws.

“This is not a political protest. Anybody who shares the ideology of the BKU and Rakesh Tikait are welcome here.

But it is our appeal to those who do not wish to support the movement till the end that please do not come only to leave in between,” he said.

Asked about estimated crowd size at the site, the farmer leader from western Uttar Pradesh said, “Farmers are coming in to show solidarity and leaving.

It is not a stagnant crowd.

” On Saturday night, the BKU office-bearers had estimated a crowd of around 10,000 people at Ghazipur while the Ghaziabad police officials pegged it around 5,000 to 6,000.

Heavy security deployment, including personnel of the Provincial Armed Constabulary (PAC), Rapid Action Force (RAF) in anti-riot gears and civil police, was made at the protest site.

Meanwhile, the Delhi Traffic Police said to and fro movement on the National Highway 24 (Delhi-Meerut Expressway) has been closed.