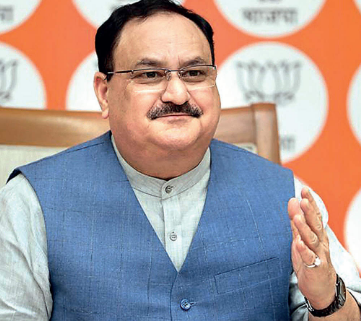 BJP national president JP Nadda said on Sunday that Prime Minister Narendra Modi freed the farmers of India by bringing the farmers law. Now the food giver will not have to go round to place to take account of his hard work. The BJP president, who was on a tour of Bihar, said these things during a public meeting held at Gandhi Maidan.

Nadda said that the NDA government did better for education. 14 medical colleges were opened in Bihar under the NDA rule. We made separate budgets for students in five years.

The BJP president said that our party was always ahead for the development of Bihar. Nadda said the Nitish government has changed the picture of Bihar. He lashed out at the opposition saying that elections are held for development.

Before coming to Gaya, BJP National President JP Nadda offered prayers at the Mahavir Temple in Patna. After this, Nadda reached JP residence at Kadamkuan and garlanded the statue of Jayaprakash Narayan. During a brief interaction with the media on this occasion, Nadda said that JP was tortured a lot during the imposed emergency of the Congress, but he did not turn from the path of truth. JP worked to shake the foundation of the Congress against corruption, nepotism, unemployment.