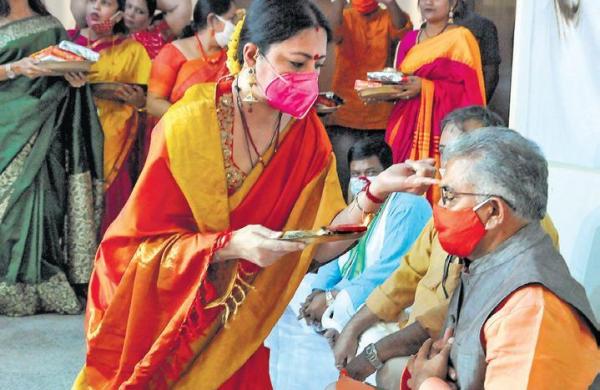 By Express News Service
KOLKATA: The BJP high command’s decision to provide all their MLAs central forces’ security cover — a strategy they wanted to employ to highlight West Bengal’s deteriorating law and order situation — received a jolt with at least a dozen MLAs refusing the offer.

These MLAs said the decision will cause more damage to the party’s image as no MLA from any other party has so far been seen with a posse of central force personnel in West Bengal.

The BJP’s MLA in Siliguri Shankar Ghosh, who defected from the CPI(M) before the election, said he doesn’t need any security ring.

“I grew up in such a political atmosphere where such a concept didn’t exist. I will prefer to roam in my constituency riding my scooter. My style of functioning helps me to connect with common people. If I move with central force personnel, it will not help me to take my voters into confidence,” said Ghosh.

Before the elections, 13 MLAs, who had defected from the TMC to the BJP, were given security cover by the Centre. After the Assembly polls, the party decided to extend the same to all their 77 MLAs.

“The decision was unprecedented. It was taken to highlight Bengal’s lawlessness. Providing MLAs central force security was a brainchild of our national leaders. Many of us feel if an elected MLA roams around with such a security cover in his or her constituency, it delivers a message that will not yield our party any electoral dividend,” said a senior BJP leader from Bengal.

Dabgram-Phulbari MLA Shikha Chattopadhyay echoed Siliguri MLA Ghosh’s views and said, “My constituency houses many slums. If I visit the areas with central force personnel, the local people will not speak to me as freely. If I cannot know the plight of the voters in my constituency, how will I be a successful public representative? I have already written to my party informing my decision.”

Anandamoy Burman, MLA from Matigara-Naxalbari, said the support of the local people is his security. “BJP has massive popularity in my constituency. I have got love and support of the people in this area which is my biggest security,” he said.