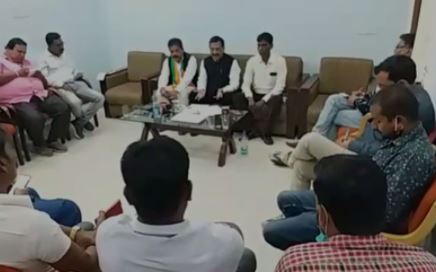 State BJP Working Committee member Kedar Gupta reached Gariaband on Wednesday. Discussed the problem of farmers with reporters here. In this, he told that the farmer of Chhattisgarh is very upset. The Bharatiya Janata Party will lay siege to the collectorate on 22 January, staging a sit-in at all district headquarters in Chhattisgarh. Gariaband headquarters will also make arrests after mass demonstrations. Gupta said that the Congress government of Chhattisgarh is anti-farmer. This state is continuously doing injustice to the farmers. The state has taken a loan of 27 thousand crores in 2 years, which is falling on the common citizens. It can be assumed that this government is taking a loan of 1 thousand crores per month and today this state, which is called the rice bowl, has completely sunk in debt. Asked about this, farmers are opposing the policy of the Center. If the bill has been brought against the farmers of the central government, they say that the problems and problems that the farmers are facing, they support all things. They want that the problem of the farmers in the center too should be resolved as soon as possible and for this, it has been talked up to the Supreme Court that a decision will come in the interests of some farmers, which we should wait for. Regarding the rising rate of petrol diesel, he said that it depends on the price of petrol diesel based on the international market. On the matter of giving benefit to some industrialists, they say that the industrialist is not the present industrialist, already they are industrialists and their work is already going on, it is not that they do not have any new work. They say on the vacant space and the representation of terrorists regarding the peasant movement. Gupta said that the state government is harassing the farmers by making an excuse for gunny bags. As per the government promise, the farmers have not received the entire bonus till now. It is sad that on January 22, the BJP will encircle the collectorate by organizing a massive agitation on these issues.

Groups getting strengthened by Vermicompost and vegetable production