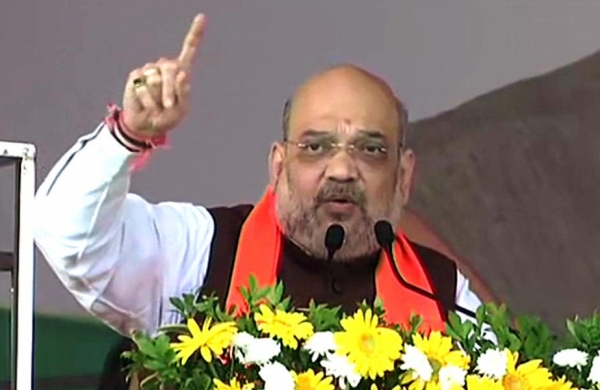 By PTI
KHARAGPUR: Union Home Minister Amit Shah on Sunday promised that after coming to power, the BJP will be successful in ushering in “true change in West Bengal and turn the state into “Sonar Bangla” (Golden Bengal) again.

Shah claimed that the huge turnout in the roadshow underscored that people want change in the state under the leadership of Prime Minister Narendra Modi.

“I promise that the BJP government will be successful in bringing ‘asli parivartan’ (true change) and ‘Sonar Bangla’ will be created again,” Shah said in a brief speech at the end of the roadshow.ALSO READ | Bengal will never bow down before outsiders: TMC’s Abhishek Banerjee attacks BJP

The roadshow, held between the local BJP office ‘Premhari Bhavan’ and Malancha petrol pump, took over an hour to cover the less than one kilometre stretch, as the huge gathering made it almost impossible for the motorcade to move ahead.

Thousands of people took part in the roadshow, which began after sundown, while people also gathered on rooftops and balconies in buildings on both sides of the road to watch it.

Shah waved at the spectators and threw rose petals at the participants of the roadshow, with BJP candidate for the Kharagpur Sadar constituency, Hiran Chatterjee, an actor, by his side.ALSO READ | West Bengal polls: Babul Supriyo, Locket Chatterjee among BJP’s new list of candidates

Visibly pleased at the huge turnout, a smiling Shah showed the victory sign at the participants and spectators.

The turnout proved that Chatterjee will surely be elected to the assembly, the Union minister said.

As the wave of people moved forward slowly, the air reverberated with a newly coined slogan, “Ebar BJP” (BJP this time).

The slogan was also written on the decorated truck on which Shah was standing, and in festoons and posters.

Security personnel had a tough time managing the crowd as the number of people continued to rise while the cavalcade proceeded in a very slow pace.