BJP to scan TMC defectors before induction in West Bengal 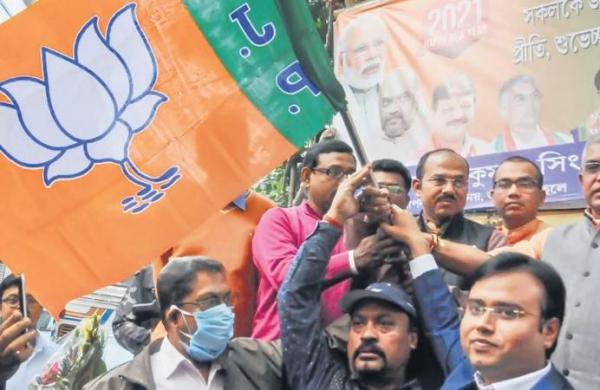 Express News Service
KOLKATA:  A week after BJP chief JP Nadda visited West Bengal and asked the party’s core panel to list reasons for a large-scale migration from the Trinamool, the party brass has decided to tweak its strategy of embracing all and sundry.

Instead, it has recommended that the defectors should be scanned before their induction into the saffron camp. The party’s change of stance came at the instance of Home Minister Amit Shah who met Bengal functionaries on Friday night in Delhi.

The rethink came a few days after the RSS, in its three-day workshop in Ahmedabad, raised questions on the mass induction of all TMC defectors in the BJP.

The “surveillance” is said to be aimed at addressing two issues: stem disgruntlement among the party’s old workers and blunt the attack of the ruling party labelling the saffron camp as a ‘washing machine’ for tainted TMC functionaries. The state BJP has made inroads into the state on the basis of anti-TMC vote share.

A section of BJP leaders said the mass inclusion in the party will send out a wrong message to the party’s anti-TMC vote-bank.

“The leadership wants us to examine the prospective defector’s antecedents, their image in public and their winning chances in the Assembly elections due in a few months. Many TMC defector MLAs had failed to secure a lead in their Assembly constituencies in the 2019 Lok Sabha elections,” said a senior BJP leader.

In response to Nadda’s curiosity about exodus from the TMC, the members of the core committee, in a meeting with the BJP chief in Burdwan on January 9, said the turncoats are either aspiring to contest in the Assembly elections on saffron camp’s tickets or looking for berths in the hierarchy.

“The party’s national leadership has realised that the TMC MLAs are shifting their political alignment towards the BJP with an aim to get ticket and contest in the elections and their followers are looking for berths in the hierarchy. There are incidents of clashes between the party’s old workers and newcomers. If we continue welcoming all defectors, our intra-party dissent will become prominent before the polls,” said another BJP leader.

BJP’s Bengal observer Kailash Vijayvargiya had said two days ago that at least 41 TMC MLAs are queuing up to join the saffron camp. But, state BJP chief Dilip Ghosh has made it clear that the newcomers would have to go through the party scanner.

“We will not induct all. A final decision will be taken by the national leadership after scrutiny,” he said.

Forest Minister Rajib Banerjee, in a Facebook Live session, expressed his unhappiness on Saturday saying the party leadership did not pay any heed to the lower-tier workers. He also alleged he was stopped on many occasions when he tried to do something for the common people.