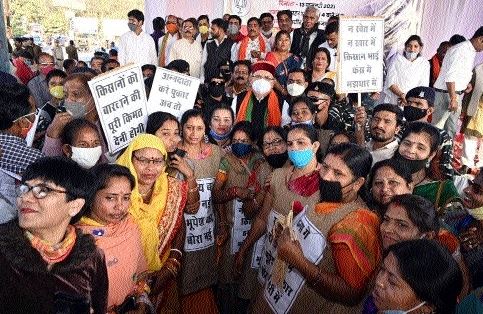 TERMING the ruling Congress Government as anti-farmer, the Bharatiya Janata Party (BJP) on Wednesday staged State-wide dharna at all 90 assembly constituencies, while commencing its drive to expose the ruling Congress Government’s failure among the people by highlighting the issues like irregularities and short-comings in paddy procurement drive, collapsed procurement system and harassment of farmers. Raising the irregularities and collapsed paddy procurement system, the BJP leaders raised issues like farmers’ suicide due to writing off paddy acreage under Girdawari, rampant corruption prevailing in paddy procurement centres, pending payment against paddy, payment due against previous year’s paddy procurement, politicisation on gunny bags, breach of promise, deliberately harassing the farmers, etc. BJP National Vice-President Dr Raman Singh while leading the dharna at Rajnandaon said that when time has come for fulfillment of promises made by the ruling Congress Government in its manifesto, it is busy finding lame excuses. This dogmatic approach of the state government is not only hurting the farmers but also the people of Chhattisgarh are feeling harassed. Farmers today are comparing the situation between 2 years of Congress rule and 15 years of BJP rule. During the BJP regime never ever such a crisis over payment against paddy procurement or shortage of gunny bags have taken place. Altogether 255 farmers have committed suicide and the BJP is demanding Rs 25 lakh compensation for their family members. BJP State President Vishnu Deo Sai who participated in the dharna at Jashpur, said the anti farmer approach of the ruling Congress government is gradually being exposed. Now in order to hide its failures, it is masquerading with illogical matters which the people are understanding very well. BJP Legislative Party Leader Dharamlal Kaushik while participating in the dharna at Bilha said farmers are being equally harassed across the state and in the name of assistance the farmers are getting nothing. Paddy acreage has been written off in the name of girdawari process. Spurious fertilizers and insecticides are being sold across the state which is affecting agriculture prospects seriously and farmers are incurring heavy losses and are compelled to commit suicides. MP Saroj Pandey while participating in the dharna at Durg said the Congress which came to power by promising sops to farmers is today committed to harass and harm the farmers. Due to these double standards of the Congress, there is huge resentment among the farmers. In the capital, MP Sunil Soni, former Agriculture Minister Brijmohan Agrawal, former Minister Rajesh Munat, Raipur President Srichand Sundrani while addressing the mega dharna alleged that the state government has crossed all limits of sensitivity. With an objecting to avoid procurement of cent percent paddy of farmers, it is giving lame excuses every day and thus exposing its anti-farmer character. The paddy which the state government is procuring, its payment is not being deposited in the farmers’ account despite months having passed. Reiterating the statement once made by the former AICC President Rahul Gandhi that the state government of State where farmers commit suicide, is a hopeless government, the BJP leaders asked him that despite hundreds of farmers have committed suicide during two years of Congress rule, the former AICC President doesn’t have time to seek reply from its own government.