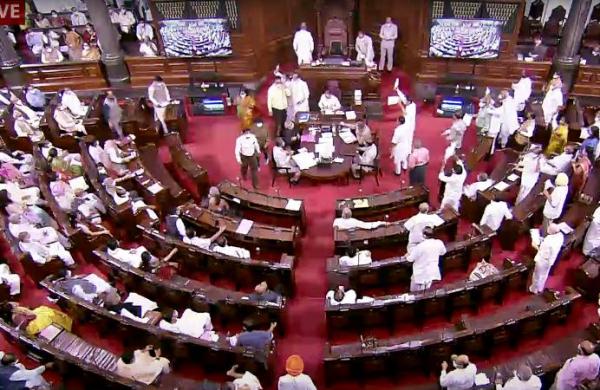 By PTI
NEW DELHI:  Asserting that preventing a possible third wave of COVID-19 is the biggest issue now, the BJP hit out at opposition parties on Wednesday for disrupting Parliament proceedings over “manufactured” matters like the Pegasus snooping and claimed it was “anti-national” to not discuss the pandemic in both the Houses.

The BJP also made light of the unity among opposition parties against the Narendra Modi government, saying they were united earlier too and the main motivation of these parties, from the Congress to several regional ones, was to protect their “family interests”.

On the other hand, Prime Minister Narendra Modi remains committed to the nation’s development, it said.

After Congress leader Rahul Gandhi said the opposition was united in demanding a discussion in Parliament on the suspected snooping, which he called an “anti-national” work, BJP spokesperson Sambit Patra hit back, saying what is “anti-national” is elected representatives not discussing an issue which has impacted the country and the world.

“Anyone who tries to prevent such a debate is striking a blow to the country… It is anti-national to not discuss the issue on the floor of Parliament,” Patra told reporters, attacking rivals.

Opposition parties have stalled Parliament over a host of issues with the Pegasus row being at the centre of their protests.

The biggest issue now is how to prevent the third wave of Covid-19 and the measures like vaccination, Patra added.

Claiming that the Pegasus row is a “manufactured” issue, he alleged the opposition parties, such as the Congress and the Trinamool Congress, were trying to “weaponise” a “non-existent” issue to stall Parliament.

The BJP leader said if Gandhi thinks that his mobile was targeted by the Pegasus spyware, then he should go to a police station and lodge a complaint.

Accusing the opposition parties of “suppressing” people’s voice, he said they had been demanding a special session of Parliament to discuss the COVID-19 pandemic but have been now stalling it when a regular session has begun.

To a question about opposition parties joining hands against the government over the Pegasus row, Patra noted they had united earlier too and referred to major anti-BJP leaders posing together after the Congress-JD(S) alliance formed the government in Karnataka in 2018 and the Congress and Samajwadi Party fighting the Uttar Pradesh assembly polls together in 2017.

Be it the Congress, Shiv Sena or the Samajwadi Party, their intention is not India’s development but to save their family interests, he alleged.

Modi does not come from a political family, and he remains committed to the nation’s development, Patra added.

Gandhi on Wednesday said the Opposition was united in demanding a discussion on the Pegasus snooping row in Parliament in the presence of the prime minister or the home minister.

He rejected the government’s charges over the disruption of Parliament and said the Opposition was only fulfilling its responsibility.