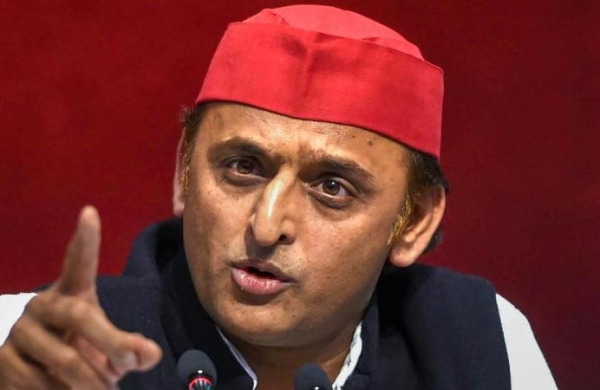 Express News Service
LUCKNOW: Firing a fresh salvo at the ruling BJP, SP chief Akhilesh Yadav on Saturday accused it of capitalising on pandemic to raise funds for the construction of Ram temple in Ayodhya.

“The BJP government itself has been saying that it creates opportunities out of the calamity. And thus, it is collecting chanda (contributions) in this time of calamity (Covid-19 pandemic),” he said at a press conference.

Notably, SP president had taunted the BJP in Parliament recently by calling the party ‘Chandajivi’ (living on donations). Akhilesh reiterated on Saturday that in ancient Indian culture, there was no such thing as Chanda. “We have the culture of Dakshina (offering). We are ready to give Dakshina, if the BJP accepts it,” he said.

Claiming that the days of BJP government in the state were numbered, the SP chief continued to attack CM Yogi Adityanath by accusing him of lying even on the floor of Assembly. “The way CM is lying in the assembly… Those who lie in the legislature, who would punish them? People will punish them,” Akhilesh said while referring to the payment of minimum support price (MSP) to farmers for their crops.

“CM lied in the assembly that MSP was given to farmers. Everyone knows that farmers did not get MSP for maize, or even rice. He (CM Yogi) charged the SP government with selling off the sugar mills, if he is really a Yogi then he should tell which sugar mill was sold out during the SP regime,” said Akhilesh.

He accused the Yogi government of doing no work during the last four year which they could show to the people before going into the 2022 polls. “This government continues to hijack SP government’s work to show it as its own,” he maintained. “This is because the CM is not from UP. He came from another state.

Had he belonged to UP he would have worked for the state,” said the SP chief.

“The way people are joining Samajwadi Party in droves; the BJP will be swept out and the people will ‘deploy’ SP in the 2022 UP Assembly polls to rescue the state,” claimed the SP chief.

Launching an attack on Centre on increasing fuel price, Akhilesh said: “To hide its failure on the economic front, the BJP government hikes petrol and diesel prices and puts the burden on farmers and the youth. And it is sad and shameful that now the government is saying the price hike was for nation-building.”