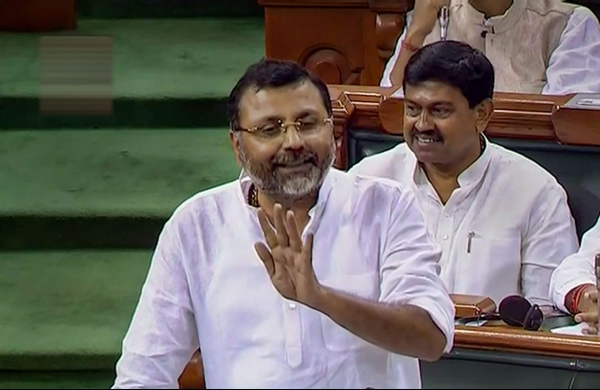 By ANI
New Delhi [India], February 4 (ANI): Bharatiya Janata Party (BJP) MP Nishikant Dubey on Thursday demanded the imposition of the President’s rule in Jharkhand alleging that 4,000 rape cases were reported last year in the state and women are not safe there.

“Our Prime Minister talks of Beti Bachao, Beti Padhao but in last one year, 4,000 rape cases were reported in Jharkhand. Girls and women were murdered after rape. The Chief Minister himself is accused of a 2013 rape case and the matter is being heard in Bombay High Court,” Dubey, Lok Sabha MP from Godda constituency of Jharkhand said.

He was speaking during the zero hour in Lok Sabha.

The Lower House of the Parliament resumed proceedings after the fourth adjournment, amid sloganeering from Opposition in protest against farm laws. BJP MP Meenakshi Lekhi, who WAS in the Chair, has requested the protesting members to use the Zero Hour to raise important issues.

Vishnu Dayal Sharma, BJP MP from Jharkhand’s Palamu asked for railways crossings that have been shut down to be opened in his constituency in the state.

During Zero Hour, Manoj Tiwari BJP MP from North-East constituency of Delhi raised the issue of education in Delhi. He requested the Education Ministry to provide Navodaya Vidyalaya in his Lok Sabha constituency.

“A lot of students are failing exams because teachers are either not available or are unable to give attention to children in schools. I don’t want to leave the important matter of education on the Delhi government so kindly open a Navodaya Vidyalay in my constituency,” Tiwari said.