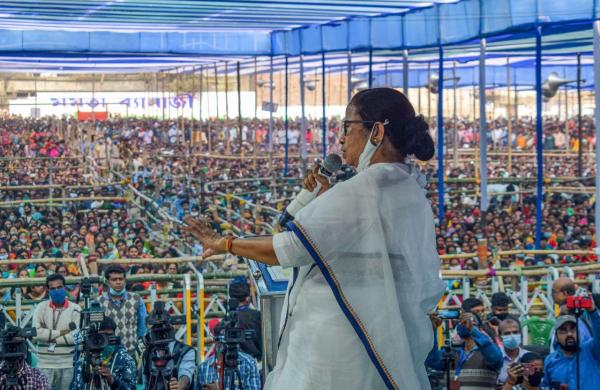 By PTI
PURULIA: Terming the BJP as more dangerous than the Maoists, West Bengal Chief Minister Mamata Banerjee on Tuesday accused the saffron party of making false promises to the people before elections.

The TMC supremo, whose party is witnessing an exodus ahead of the assembly elections due in April-May, asserted that politics is a solemn ideology and philosophy and one cannot daily change ideologies like clothes.

“The BJP is more dangerous than the Maoists,” Banerjee said while addressing a rally in Purulia district, which was once a hotbed of Left-wing extremism.

“Those who want to join the BJP can leave but we will never bow our heads to the saffron party,” she said.

Several TMC leaders have left the ruling party in the state to join the BJP.

She claimed that the BJP leaders misled the Adivasi people of the Jangalmahal area, within which Purulia is situated, with false promises and did not visit them after winning the Lok Sabha elections.

BJP candidates won all the seats in the Jangalmahal area including Purulia in the 2019 Lok Sabha elections.