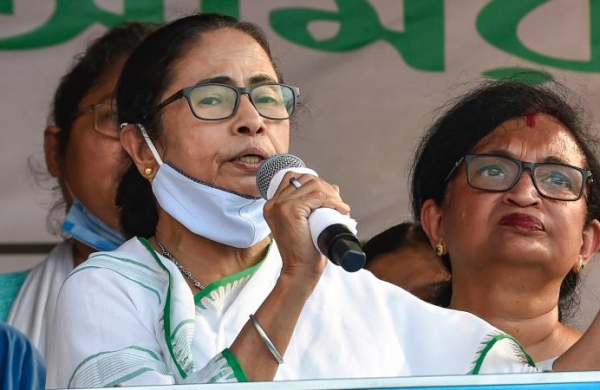 By PTI
KOTULPUR: Hitting out at the BJP over its promise to dole out “free” rice and pulses to people, West Bengal Chief Minister Mamata Banerjee on Monday said the saffron party makes “tall promises” ahead of elections, and never delivers.

The TMC supremo, who held three poll rallies in Bankura district during the day, claimed that the BJP has “roped in goons to threaten people.

These goons might visit households and ask women with folded hands to vote for them or face the threat of being herded out”.

“The BJP peddles lies before elections. They promise rice, pulses, chakri (job), everything. After polls, they are nowhere to be seen. I want to know what happened to the party’s promise of depositing Rs 15 lakh in the bank accounts of every citizen (before the 2014 Lok Sabha polls).”

“Be ready with cooking utensils to chase away such elements if they issue a veiled threat,” Banerjee said, addressing the women.

She claimed that the saffron party has hired ‘borgis’ (plunderers) from outside to “loot votes”.

Mocking the BJP’s promise of 33 per cent reservation for women in government jobs, the CM said, “They couldn’t take necessary steps to ensure 33 per cent female representation among elected representatives on different platforms.”

“On the contrary, the TMC has already made sure that women get 50 per cent representation in panchayat and local bodies. Also 40 per cent of TMC representatives in Parliament are women.”

The BJP, in its election manifesto released on Sunday, promised “KG to PG” free education, 33 per cent quota in government jobs, free travel in public transport for women, strict enforcement of the new citizenship law, and Rs three- lakh accident cover for farmers The party gave assurance that ‘Annapurna Canteen’ will be set up across the state to provide cooked food three times a day at Rs 5 per meal.

It also said that subsidised ration would be doled out through the public distribution system — rice or wheat at Rs 1 per kg, dal at Rs 30 per kg, salt at Rs 3 per kg and sugar at Rs 5 per kg.

Accusing the BJP of issuing diktats over food and clothes in states where the party is in power, the TMC chief said, “They (saffron camp leaders) dictate whether someone should wear a sari or any other attire. They decide if a pregnant woman should eat eggs.”

If the BJP is elected to power, it will roll out the NPR and NRC exercises and remove names of bona-fide citizens from these registers, she said.

“The party wants to change the history and geography of India. They change names of educational institutions at will. A cricket stadium in Gujarat has been named after PM Modi. One day they will change the name of our nation.”

“Narendra Modi will soon be projected as someone bigger than Ambedkar. Even bigger than Tagore,” she claimed.

Taking potshots at the saffron camp’s vow to free Bengal of corruption, Banerjee said, “We are yet to know the details of the money spent under PM Cares Fund. What all has been going on under the garb of disinvestment is no secret. I, on the other hand, don’t take single paise as salary. I have forfeited my allowance as a former MP, and as an MLA.”

“Modibabu, you should explain why you are so eager to sell off stakes and close down Coal India, BSNL, MTNL and SAIL. Why you are so keen on closing down nationalised banks,” she pointed out.

Training guns on the CPI(M) and the Congress, the feisty leader said that the two parties have entered into a deal with the BJP.

“CPI(M) goons had unleashed terror in Kotulpur, Chomkaitala belts (in the 90s and early 2000), when I was an opposition leader. They had even attacked me when I visited the affected areas to be on side of victims families. Those same CPI(M) harmads (goons) have joined the BJP.”

Talking about the injury she sustained on her foot during electioneering in Nandigram on March 10, the TMC boss claimed she was victim of a conspiracy hatched by rivals.

“They had hit my head, my back, my hands and almost every part of my body in the past, you all (people) know that. This time, they (rivals) decided to target my leg to stop me from stepping out of home. But they don’t know Mamata Banerjee well,” she asserted.

The CM, who addressed her second meeting at Indus, called upon party workers to stay alert when the electronic voting machines (EVMs) are put to test or faulty equipment is replaced.

“Also, please don’t accept any food and cigarettes from a stranger during the voting exercise. Don’t go anywhere leaving the EVMs unguarded, no matter who asks you to,” she cautioned.

The CM also urged the electorate to steer clear of people who offer gifts in exchange of votes.

“I won’t ask you to reject the offer because anything that they are giving you has been bought with misappropriated public money. But do not vote for them,” she insisted.

In a dig at BJP MP from Asansol Babul Supriyo, who has been fielded by the party from Tollygunje assembly seat, Banerjee, during the third meeting at Barjora, said, “Did he have to flee Asansol and move to Tollygunje, after having not done enough for his Lok Sabha constituency?”

Apparently referring to TMC turncoats and parliamentarians who have been fielded as BJP candidates, Banerjee noted, “Some people want to achieve everything in life — they want to become MPs, MLAs, councillors as well as panchayat heads. They practise gaddari (betrayal) and rush to Delhi every now and then.”

The CM further gave assurance that OBC communities which did not figure in Mandal Commission’s list will be registered by the state government, and a panel has been formed to look into the issue.

She said 250 more madrasas will be set up in the state by her government to impart modern education to Muslim community children, and scholarships worth over Rs 2 crore are already in place for them.

Banerjee also said that a dedicated freight corridor will be set up connecting several districts of south Bengal.

It will foster economic activities and generate employment in several areas including Bankura, she added.