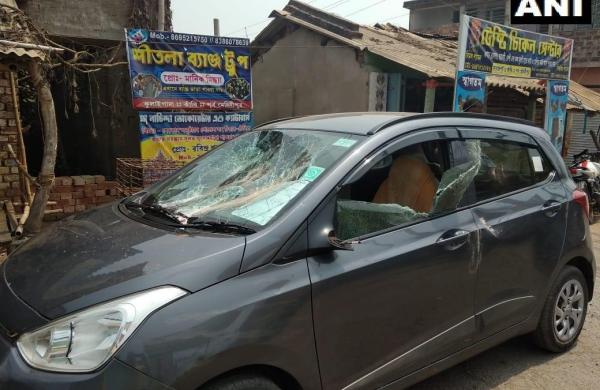 Soumendu and his brother Dibyendu Adhikari alleged that TMC block president Ram Govind Das has orchestrated the attack and that he was involved in poll rigging in three booths. meanwhile, Soumendu was unharmed in the incident.

Speaking to ANI, Soumendu said: “Under the leadership of TMC block president Ram Govind Das and his wife, poll rigging was taking place at three polling booths. My arrival here created a problem for them to continue with their mischiefs, due to which they attacked my car and thrashed my driver,” he said.

Meanwhile, Dibyendu said that he had informed the police about the incident and called on the Election Commission (EC) to take strong action in the matter.

“With the help of TMC block president Ram Govind Das, some people attacked the car and beat up the driver. They were trying to rig the polls there. I have informed the police and the Election Commission should take strong action,” said Dibyendu.

He also recalled the attack on CPIM candidate from Garbeta Sushanta Ghosh, calling it ‘unfortunate’.

The driver, Ramon Das, alleged that some ‘bohiragato’ (outsider) goons had suddenly attacked him while he was speaking with Soumendu.

West Bengal has a history of violence in the Legislative Assembly elections.

Polling for the first of the eight-phase assembly polls in West Bengal began at 7 am on Saturday with voters deciding the fate of 191 candidates in 30 constituencies.

All constituencies in Purulia, Jhargram and segments of Bankura, Purba Medinipur and Paschim Medinipur are going to decide the electoral fate of 191 candidates, including 21 women candidates in the fray. The polling will end at 6.30 pm.

The BJP and TMC have been at loggerheads over various issues and an intense tussle of power between the two parties has been seen during the run-up to the assembly elections.