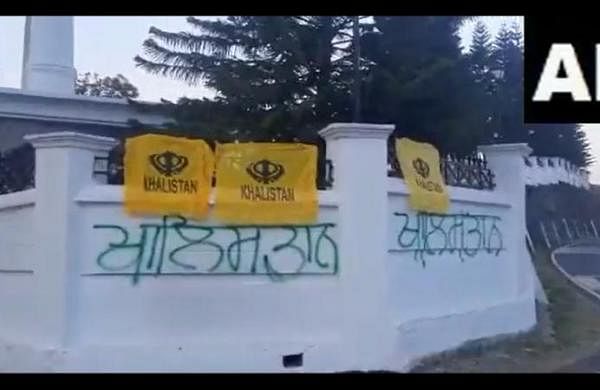 NEW DELHI: The AAP on Sunday slammed the BJP after Khalistan flags were found at the Himachal Pradesh Legislative Assembly entrance in Dharamshala, asking how will its government save the people of the country when it failed in ensuring national security.

Calling it a “huge security failure”, the Arvind Kejriwal-led party demanded that either Chief Minister Jai Ram Thakur immediately resign or the Union government sack his government in Himachal Pradesh.

Either the BJP governments at the Centre and Himachal Pradesh were “completely incompetent” or the saffron party was hand in glove with the Khalistanis that someone could walk away after tying Khalistani flags at the gate of the state assembly complex despite them being at the helm, the AAP charged.

Taking to Twitter, Delhi Deputy Chief Minister Manish Sisodia said that the putting up of the Khalistan flags outside the gate of Himachal assembly building in Dharamshala was a “complete failure” of the BJP government in dealing with the matter pertaining to national security and keeping the respect of the people of the hill state.

The BJP sharply responded to allegations and said that Khalistani activities have increased after the AAP government was formed in Punjab. Delhi BJP president Adesh Gupta alleged that the AAP was “furthering Khalistani agenda”.

In Himachal Pradesh, along with increasing AAP’s activities, Khalistani activities are also on the rise, Gupta said. The flags were put up on the outer side of the gate number one of the state assembly complex, which have now been removed by the administration.

Pro-Khalistan slogans were also found scrawled on the walls of the assembly complex, which have been painted again. The entire BJP is trying to save one goon, and Khalistani left putting up flags there (at the gate of Himachal Pradesh Assembly complex), Sisodia tweeted in Hindi, taking a dig at the ruling BJP.

He apparently referred as goon Delhi BJP leader Tajinder Pal Singh Bagga who was arrested by a team of Punjab Police on Friday from his residence in the national capital in connection with a case registered in Mohali but brought back by the Delhi Police same day later after a high-voltage drama which drew police of three states and kicked up a slugfest between the AAP and the BJP.

In his tweet, Sisodia said, “The government which cannot save the Legislative Assembly, how will it save the people. This is a matter of Himachal’s respect, security of the country. The BJP government has completely failed.”

In another tweet, the Delhi deputy chief minister called the tying of Khalistani flags at the entrance of the assembly complex a huge security failure and demanded that either Chief Minister Jai Ram Thakur resign or the Union government sack his government in Himachal Pradesh.

The AAP called the incident a shame on the BJP, saying someone could walk away putting up Khalistani flags at the entrance of the Assembly despite the saffron party being at the helm, both in the state and at the Centre.

“Shame on BJP. It’s their government in Himachal and at the Centre. Yet someone leaves after putting up Khalistani flag at Legislative Assembly, which means either they (BJP) govt are completely incompetent or they are hand in glove with Khalistanis,” the party said in a tweet in Hindi.

Responding to allegations, Delhi BJP chief Gupta in a statement alleged, “Even before Punjab polls, Kejriwal was having meals with Khalistani chief at his house. Now, when polls are due in Himachal Pradesh, a Khalistani flag has been put up outside state assembly there to defame the state.”

Gupta alleged it cannot be denied that “ever since AAP became active in Punjab, Khalistani moment is gaining strength there.” The extremist, Pannu, openly charged that “we gave foreign donation to AAP for winning Punjab polls.”

Earlier it was in Patiala and now this flag being put up at Himachal Pradesh state assembly in Dharamshala today. It’s not a coincidence but an experiment. It is time to stop such acts of Khalistanis in Punjab and other parts of the country, Gupta said in the statement.

In the run-up to the assembly polls in Himachal Pradesh scheduled later this year, the AAP recently found itself at the centre of a controversy after the BJP accused the Arvind Kejriwal-led party’s social media in-charge in the hill state Harpreet Singh Bedi of openly supporting the Khalistan referring to a series of his tweets posted on the microblogging site few years ago.

Acting swiftly on the BJP’s allegations, the AAP expelled Bedi from all posts in the party over his alleged pro-Khalistani tweets, saying that the views expressed by him in his posts on the micro-blogging site were against the Aam Aadmi Party’s ideology.

Buoyed by its landslide victory in neighbouring Punjab, the AAP is gearing up to contest on all seats in the upcoming assembly polls in Himachal Pradesh.