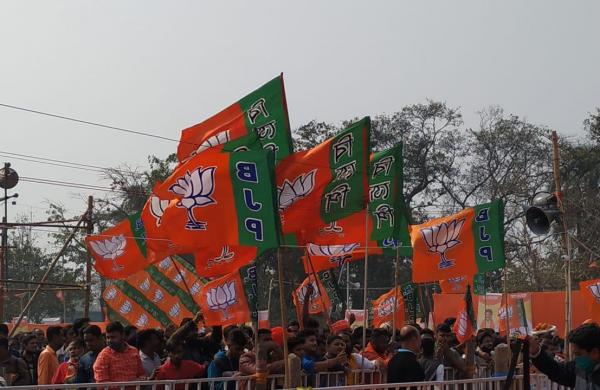 By PTI
KOLKATA: BJP workers across Bengal continued their protest over the party’s candidate selection on Tuesday, with many of them staging demonstrations outside the saffron camp’s election office here, and others hurling stones at some of the nominees, prompting police action.

Several saffron party workers clashed with the police, when they were stopped from gheraoing candidates who were about to enter the party office to meet their seniors.

The police had to resort to mild lathi-charge to disperse the protesters — many of them active members from Canning West, Magrahat, Kultali and Joynagar in South 24 Parganas — outside the party’s Hastings office in the city.

At least six activists were detained, and one policeman injured in the melee.

“We want immediate withdrawal of Arnab Roy’s candidature from Canning West seat. He switched over to the BJP from the TMC only five days ago,” a party activist from the constituency said. The protesters claimed that TMC leaders involved in corruption have been given nomination by the BJP.

Some of them also said that the turncoats had once unleashed violence on BJP members.

“We will sit idle and not work for the party’s election campaign if the candidate list is not revised,” Ronny Manna, a long-time BJP worker from Magrahat, said.

Demonstrations outside the BJP’s election office here and other parts of the state have been underway since Sunday evening, after the announcement of the party’s second list of 63 candidates for the third and fourth phase of elections in Bengal.

Sayantan Basu, the BJP’s state general secretary, said the leadership was looking into the matter.

“The party is growing in size, as more and more people continue to join us. The number of aspirants has swelled. There are bound to be some problems, but that will be addressed soon,” he claimed.

Reacting to the incident of the police lathi-charge, BJP state spokesperson Shamik Bhattacharya said the “that was totally uncalled for”.

“The lathi-charge was unprovoked and unwarranted. We don’t believe our activists hurled stones at anyone,” he said.

Denying the charge, a senior police officer said action had to be taken to control the agitators, “who were getting violent”.