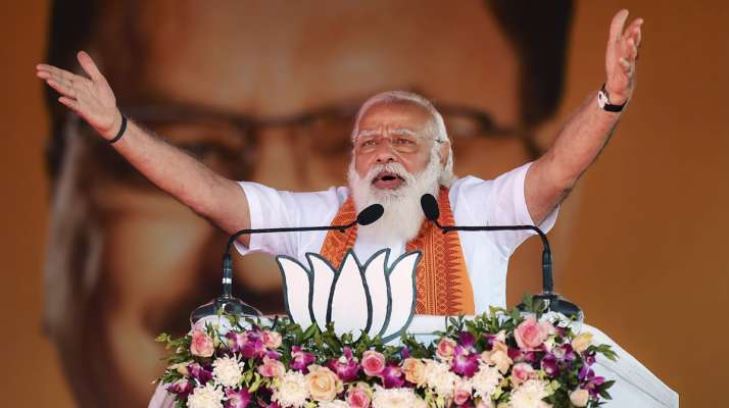 Prime Minister Narendra Modi on Saturday promised to bring ‘ashol poriborton’ (real change) in West Bengal if the BJP forms the next government in the state. Addressing an election rally in Kharagpur, PM Modi recalled the revolutions that have hailed from West Bengal. He said that Bengal is in the DNA of the BJP as he mentioned that the Bharatiya Jana Sangh, a forerunner of the BJP, founders were from the state.

“I bow to the land of Bengal, and am fortunate to address such a huge rally,” the Prime Minister said.

“You have seen destruction by Congress and the Left. TMC ruined your dreams. In the last 70 years, you gave opportunities to everyone but give us 5 years, we will free Bengal from the 70 years of destruction, we will sacrifice our lives for you,” he said.

“The father of the Jana Sangh was the son of this Bengal. Therefore, if there is a Bengal party in the true sense, then it is the BJP. The BJP’s DNA has the ethics, thoughts, behavior and values ​​of Ashutosh Mukherjee and Dr Shyama Prasad Mukherjee. With these values, we want to bring every region of Bengal to a new height of development. We not only want to feed lotus in Bengal but also want to make the future of the people of Bengal bright,” the Prime Minister said.

“In this region, there is an outline of mini-India. India’s diversity and presence of different languages is also a factor. The longest railway station as well as the first IIT of the country highlight Kharagpur. I am here to assure you of ‘ashol poriborton’ (real change),” he added.

PM Modi then praised Bengal BJP chief Dilip Ghosh, saying that “despite regular attacks on Ghosh, he has not refrained from working for the state”. Referring to the huge crowd at the rally ground, he said, “Your excitement reflects that Bengal will form a BJP govt after the Vidhan Sabha elections. A BJP government is essential for a prosperous future of Bengal. 130 karyakartas from Bengal have laid down their lives in this struggle.”