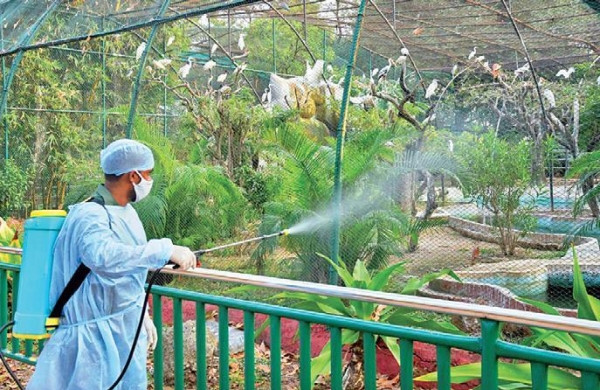 By PTI
NEW DELHI: A day after over 1,200 birds were found dead in the country with seven states confirming outbreak of avian influenza, the Centre on Sunday directed zoo managements to submit daily report to the Central Zoo Authority (CZA) till their area is declared free from the disease.

The CZA, under the environment ministry, issued an office memorandum directing management of all zoos to strengthen surveillance and aviary management.

“In endemic areas, entry to aviary sections may be monitored and restricted, and all vehicles entering the zoo may be sanitised.

“Bird exchange programmes (both national and international may be stopped until further notice). Entry points of migratory birds to be strictly monitored. Aviary enclosures may be disinfected and all keepers in the sections may be instructed to follow disinfection protocol and use PPE kits which may be destroyed as per standard protocols,” it said.

The CZA said avian influenza is a scheduled disease under the Prevention and Control of Infectious and Contagious Diseases in Animals Act, 2009, and reporting such a disease is obligatory for taking appropriate preventive measures against its spread.

“In the event of declaration of infected area within a zoo, either due to outbreak within the zoo or if the zoo is located within the surveillance zone as notified by central/state government, the officer in charge of the zoo shall submit a daily report to the office of the Central Zoo Authority (CZA) till the area is declared free from avian influenza by the competent authority,” the memorandum stated.

The CZA also advised that strict hygiene protocols must be maintained in all aviaries and all droppings must be collected, disinfected and disposed of appropriately.

Over 1,200 birds were found dead across the country on Saturday, including 900 in a poultry farm in Maharashtra, with the Centre saying that the outbreak of avian influenza has been reported in Uttar Pradesh, taking the total number of affected states to seven.

Besides Uttar Pradesh, the other six states where bird flu has been confirmed were Kerala, Rajasthan, Madhya Pradesh, Himachal Pradesh, Haryana and Gujarat.

The Centre on Saturday said confirmation of bird flu in Delhi, Chhattisgarh and Maharashtra, is awaited as the samples have been sent for testing.