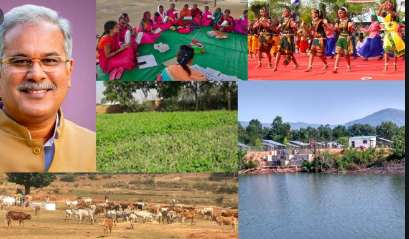 Chief Minister, Mr. Bhupesh Baghel, has taken a new life to the rural economy of the state with the vision of saving the four symbols of Chhattisgarh, ‘Narva, Garuva, Ghurwa and Bari’. . He is now starting to appear on the ground. Under Narva program, an important component of Chhattisgarh government’s ambitious Suraji village scheme, a large number of rivers and drains are being conserved and promoted in all districts of the state. With this, availability of drinking water, development of irrigation resources, recharge of ground water is giving a new life to the rural economy.  The National Water Award for the year 2019 will be given to both the districts for the conservation and promotion of water sources by the Ministry of Water Power of the Central Government. In this, Bilaspur district has been selected for the first prize at the national level in the East Under Revival of River category and Surajpur district in the East Under Water Conservation category. The award will be given in the month of November.