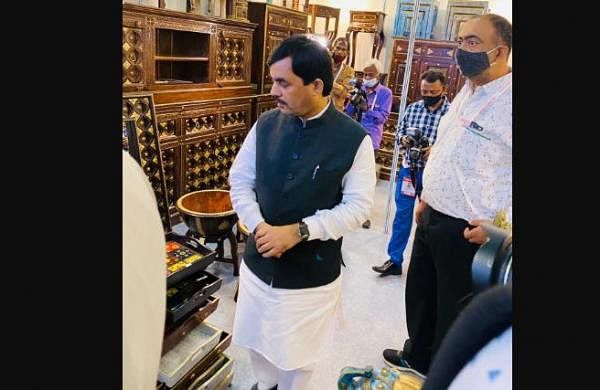 NEW DELHI: The exquisite and traditional handlooms, artefacts and other items of Bihar’s sujani crafts, madhubani paintings, Bhagalpur-silk and the Sikki arts (a type of bed sheet) showcased at the ongoing international Indian Handicrafts and Gifts Fair-2021 in Greater Noida were instant eye-catchers for the visitors.

Upendra Maharathi Shilp Anusandhan Sansthan put up exhibition of Bihar’s traditional arts and cultural artefacts at the fair which concluded on Sunday.

The attires, ethnic wears and other items of special occasion-based garments-all manufactured with famous Bhagalpur silk were among other items that attracted the visitors, including foreigners at Bihar’s stall in the fair.

Madhubani paintings-made by artists belonging to the state on various religious, ecological and social subjects attracted youngsters in larger number.

“Bihar’s handicrafts products were instant attention seekers of foreign and indigenous shopping in this international handicrafts fair for the first time”, said an official of Upendra Maharathi Shilp Anusandhan Kendra

Syed Shahnawaz Hussain, Industry minister of Bihar, on Friday visited the stall and said that demand for for the handicrafts from Bihar was high amongst foreigners and also others who visited the fair.

“I was delighted at the display of Bihar’s handicrafts at the fair, which exhibited the cultural and traditional beauty of the arts of Bihar at a national and international level”, he said.

Hussain on the sideline of his visit to the stalls, also discuseed about the state’s opportunities in handicrafts with DG of Export Promotion Council for Handicrafts RK Verma and  other organisers of the fair.