Bihar CM Nitish Kumar interacts with Bihari diaspora, invites them to explore potential of the state 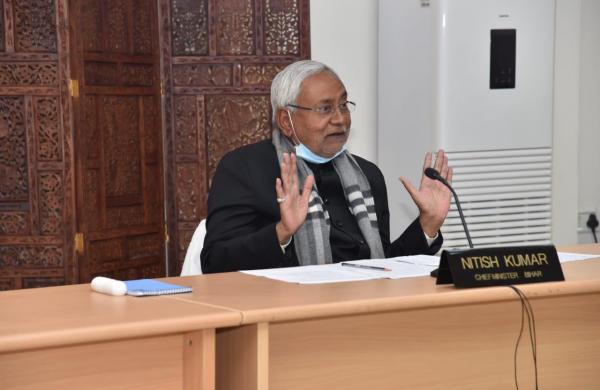 Express News Service
PATNA: “Bihar is moving on the right path of growth and will move furthermore to become the best in every spheres of development,” said Chief Minister Nitish Kumar while interacting with the Bihari diaspora from under the auspices of Bihar-Jharkhand Association of North America on Saturday evening.

Detailing about the progress made in the state in the tourism sector, Kumar informed that a glass skywalk at Rajgir and a plethora of works for eco tourism, safari tourism and others have been carried out.

He told them that the state government has planned to provide gangajal to many cities including Gaya. He also said that the police headquarters named Sadar Patel Bhawan has been built to withstand earthquakes upto 9 on the richter scale.

“In Bihar, everything is available but what is lacking is industries. After speaking to all of you, I’m now convinced that you will be helping in industrialization of the state”, Kumar said, assuring the diaspora of providing all required help. He assured that time bound clearance of official processes would be ensured for whomsoever comes to set up industry here.

The CM said that per capita income in Bihar has increased and all villages havs been electrified and linked with metalled roads. He also outlined the salient features of museums built at Patna being of international standard while another one is being built in Vaishali.

The chief minister also informed that beautiful parks have been built in Jamui and the first state sponsored birds festival was conducted here.

He said that tourism is being promoted across the state and steps taken to explore avenues of eco tourism.

Expressing thanks to the NRIs born in Bihar, he said that as a global feeling has come alive for developing the state, it shows a bright future

“You all are cordially invited to visit Bihar. The government will make all arrangements to take you across the state and is willing to listen to your suggestions”, he said. He also invited people to visit the state to study its potential.

Prior to the interaction with the CM, chief secretary Deepak Kumar detailed the diaspora about works carried out in agriculture, road and electricity sectors.

The CS also said that Bihar has the potential to make its traditional food “dahi-chura” a global delicacy.

He informed the diaspora that more than 450 acre of land is available at 68 locations in Bihar to be used for industrial growth.