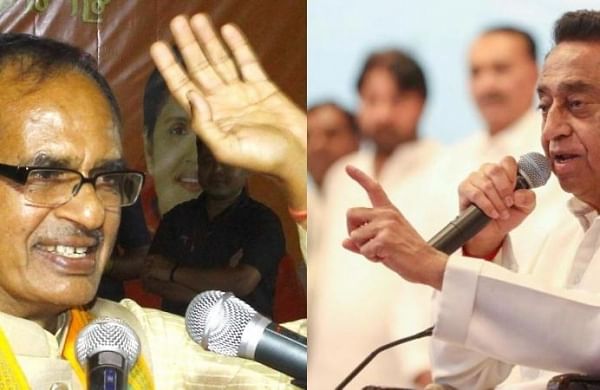 BHOPAL: In what was seen as Shivraj Vs Kamal Nath battle, the Madhya Pradesh chief minister has outsmarted the Leader of Opposition.

The CM, who is undoubtedly BJP’s most popular face in the state after the Prime Minister Narendra Modi campaigned to the full against Nath, who not only joined the campaign trail late, but also largely remained confined to addressing lesser rallies than Chouhan.

Not only did 74-year-old Kamal Nath hit the campaign trail nearly two weeks after 62-year-old Chouhan did, but also addressed 26 fewer meetings than the present CM.

And that wasn’t all. As Kamal Nath just stood confined to addressing a few rallies, Chouhan followed the rallies with night halts at the houses of BJP workers at five places in the by-poll bound assembly and parliamentary constituencies.

“These polls have once again established that the CM is the most charismatic BJP leader in the state. His night halt in Jobat-ST seat, which has since decades been a Congress citadel, played a seminal role in boosting BJP’s chances. The night halt was followed by early morning chaupal with tribals, which not only boosted BJP prospects among tribals but also compelled the BJP workers to shelve their anger over the fielding of imported candidate (ex-Congress MLA Sulochana Rawat) instead of a core BJP candidate and work unitedly for the party’s success. On the other hand, Nath remained more in the air and less on the ground, sticking largely to the virtual world of Twitter,” said Chandrabhan Singh Bhadauria, a senior journalist, who extensively covered the Jobat-ST by-poll.

Even in the Raigaon-SC seat of Satna district (a BJP citadel) which was the lone seat won by the Congress, the CM had started working on ground zero, even before the by-polls were announced. “It was largely due to faulty candidate selection which led to internal differences within the local party organisation and the absence of a BSP candidate that helped the Congress candidate win the by-election. There was no decline in the CM’s popularity anywhere in the constituency. Had the CM not toured the constituency proactively, the BJP candidate would have lost by much bigger than the present 12,000-plus votes margin,” Satna district-based political commentator Vishnukant Tripathi said.

Not only was ex-CM Kamal Nath outclassed by Shivraj Singh Chouhan, but another Congress stalwart and ex-CM Digvijaya Singh too suffered major jolt due to the loss in Khandwa Lok Sabha and Jobat-ST seat, where electioneering was largely supervised by him. Particularly in the Khandwa Lok Sabha seat, the former MLA Raj Narayan Singh Purni was given the Congress ticket due to proximity to Singh only.

The 3-1 by-poll win not only ended up becoming a shot in the arm for Chouhan (ending speculations about his replacement as CM), but also once again brought to the fore organisational capabilities and poll winning strategies of young state BJP president VD Sharma. “Though he came under heavy criticism over outsiders Sulochana Rawat (who won from Jobat-ST) and Shishupal Yadav (who won from Prithvipur) being fielded as BJP candidates instead of core BJP leaders, but his micro-level planning ensured the party’s triumph on three of the four seats,” said political journalist Chandrabhan Singh Bhaduaria.

The loss of three out of four seats (two of which were won by Congress in 2018 polls) also once exposed the hollowness of the tall claims of the Congress party of being united in the by-polls. In Khandwa, fielding Raj Narayan Singh Purni instead of ex-MP and former union minister Arun Yadav, was seen to have largely prompted first-time Congress MLA Sachin Birla to switch to BJP just six days before the by-poll. Importantly, it was Birla’s Barwaha assembly segment (one of the eight seats making the Khandwa LS seat) from where the BJP led by maximum margin.

In Jobat assembly seat, the Congress being a divided house became official, after the loser Congress candidate Mahesh Patel blamed some senior Congress leaders for the defeat. “Some Congress leaders have contributed to the party’s defeat, I’ll submit a report about it to state party chief Kamal Nath,” Patel said.