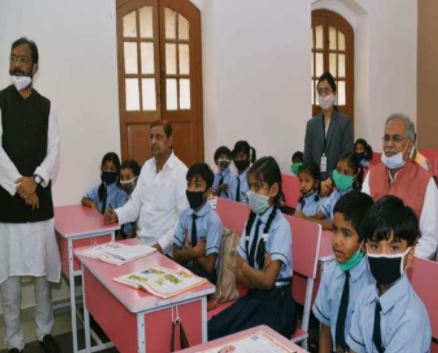 Chief Minister Baghel visited various classrooms during the observation of the English Medium School and discussed with the students and teachers about teaching and learning in the school. Studying school children spoke to the Chief Minister in English and also recited Poem to them. Seeing the children studying in the digital class room, the Chief Minister recalled his studies saying that we had studied in the black board duster, but now our new generation has got the facility to study in the digital class room.

Baghel congratulated all the people for Chherchera festival during the interaction with Palko. He said that English Medium School has been started to promote teaching and learning in English medium. In the first phase, 52 English Medium Schools have been started in the state. 100 more new English medium schools will be opened from the next academic session. Palak Virendra Pandey, Rekharam Sahu and Ranjit Singh Thakur told the Chief Minister that Swami Atmanand English Medium School Scheme is a very good scheme for the middle class family. Frustrated with the fees of private schools, the parents thanked them for the establishment of English medium school. On the request of the students, the Chief Minister also played badminton with the students and took selfies.