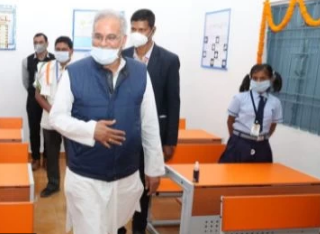 Bhupesh Baghel has made a big announcement, the CM has said that the school fees of children studying in private schools will be borne by the state government under the ‘Mahatari Dular Yojna’ run by the state government.
Let us inform that the Chhattisgarh government has come up with the Mahtari Dular scheme for the children who have lost their parents or earning member of the family due to Corona. Its notification has been issued. This scheme is starting from academic session 2021-22. Under this, the government will provide free school education up to class 12 to such children. There will also be a fixed scholarship every month.
According to the scheme, the children who are eligible for this scheme will be provided free education in government schools of the state. Such children will be given priority in admission in Swami Atmanand English Medium School of the State Government. The state government will bear the entire cost of their education. Such students will be given a scholarship of Rs 500 per month from class 1st to 8th and Rs 1000 per month from class 9th to 12th. The government says that such children will be encouraged to pursue higher education after schooling. Training, coaching facilities will also be made available to the talented students for admission in vocational courses. The scheme was approved in the meeting of the State Council of Ministers held on May 18 under the chairmanship of Chief Minister Bhupesh Baghel.
This scheme will be for the families of the natives of Chhattisgarh. Such children whose family earning mother or father or both have died due to corona will come under the purview of this scheme. Such children will also be included in this scheme, whose maintenance problem has arisen due to the absence of adult earning member in the house.