Bhupesh Baghel wrote a letter to the Defense Minister, requesting to set up a cantonment in Bilaspur soon 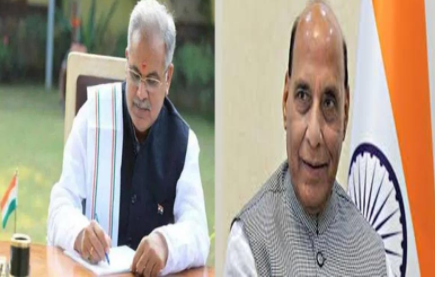 Bhupesh Baghel has written a letter to the Defense Minister Rajnath Singh, requesting to set up the pending army camp at Bilaspur at the earliest. The Chief Minister has attracted the attention of the Union Defense Minister towards the development of the state in the direction of the development of military institutions in the state. He has written that the state has sent about 1000 acres of land to the Ministry of Defense for the establishment of the Army Cantonment in Bilaspur Is allocated The process of setting up this army camp is pending. Initially, the requirements of the airstrip were stated along with it for setting up the Army Cantonment. In view of the aviation requirements of the region, the state government. The airstrip has been completed by completing the necessary procedures. Bilasabai Caveen Airport. Bilaspur now recognized by DGCA in 3C VFR category. Now this airstrip is available to cater to the aviation related requirements of Civil Aviation and Army.

The Chief Minister has written that commercial passenger services are starting from Bilaspur on March 1. The state government is keen on setting up an army camp at Chakrabhata, Bilaspur. The establishment of army cantonment in the state will not only speed up the proper development of this area, but also the opportunities for army service will be readily available to the youth of the state. The presence of Army Cantonment in the state is also expected to be helpful in the direction of eradication of Naxalite extremism. Chief Minister Baghel has said that in view of the benefits to the State Government and the Central Government from the establishment of the Army Cantonment, the State Government wants to urge the Ministry of Defense to expedite its establishment. In this direction, the state government is also ready to consider other related requirements of the Ministry of Defense and the Army. In this context, the State Government is ready to work with the Ministry of Defense. I look forward to your cooperation.